It only took a jury 2 1/2 hours to find an O’Fallon, Missouri couple guilty of child endangerment. 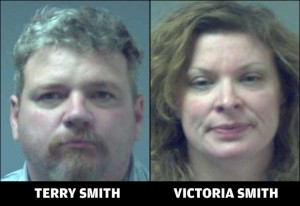 Terry and Victoria Smith were charged with keeping their 6 year old autistic son, locked in a cage, forcing him to live in his own feces and urine.

In December police responded to a child abuse hotline call where they found the child, locked in a urine and feces soaked enclosure, in the basement of their home.

The St. Louis Post Dispatch reported that the will recommend a sentence which could be up to a maximum of 7 years.


Earlier reports describe the conditions in which the boy was living and tell of his father cutting up a hot dog and setting it on the floor for the boy to eat.

Prosecution accused the Smiths of scamming the government for $35,000 they received to care for the boy.

Get all the updates on this story and other breaking headlines by downloading the FREE Daily Headlines App!

Check out these top stories!

[PHOTO] Here is the note that was left with $40 cash on a Deployed Marine Girlfriends car In Missouri!

Wow, I am lost for words. Came out of the gas station in Hillsboro and I find this under my windshield wiper. I couldn’t be anymore thankful! God bless this person, we need more people like this in the world. It says- […]

Another Tragic Story Reinforces The Necessity For Strong/Responsible 2A Rights

A neighbor of an Alabama woman saves her life by shooting a rapist/home invader in the chest. This great article by BearingArms.com outlines a tragic story, while it ended in the death of a violent perpetrator, could have been a lot worse. A […]

Champion Of The Little Guy, Hillary, Parks The Scooby Doo Van In A Handicapped Space!

The Future Lier-In-Chief Changes History: Her Own!

It’s Just A LITTLE White Lie: Surprisingly CNN is stepping up and pointing out that Hillary is a LIAR. That’s something most of us, who are on the right side of the constitutional line, already know, but now, even some of the […]

Champion Of The Little People, Hillary, Too Tight To Tip

Maybe it’s because she and Bill were “dead broke” after leaving the white house. Maybe campaign contributions are rolling in as fast as she thought they would. Maybe it’s costing more to fill up the ol’ Scooby mobile than anticipated. But Hillary […]


Previous [Watch] This Pig thinks it's a Horse!

Next [WATCH] Woman Arrested While Protecting the US Flag from Damage....