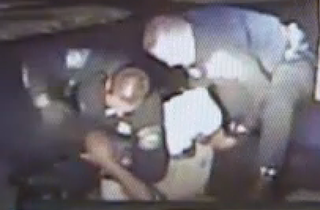 An Inkster, Michigan police officer was fired after dashcam video surfaced of him repeatedly punching a suspect pulled over on a traffic stop three months ago.

At one point in the video, Officer William Melendezappears to start beating Floyd Dent after dragging him out of the car. There’s another officer there with him, and several more show up moments later in the video.

The police claimed that resisting arrest, but Dent insisted he was just trying to protect himself. He was pulled over, apparently, for not stopping at a stop sign, and they said they found cocaine in Dent’s car, but he claims they planted it.

Watch the video below, via CBS Detroit: