(CNN)The Baltimore Police Department released the names of six police officers suspended with pay after the arrest of Freddie Gray, who died of a spinal injury on Sunday, as the mayor promised answers.

After an “in-custody death,” it is standard procedure to release the names of officers involved, said Baltimore Police Department spokesman Capt. Eric Kowalczyk.

It doesn’t mean the officers did anything wrong, nor does it mean that these were the only officers involved, he said.


Of the six officers, three were on bikes and initially approached Gray, another made eye contact with Gray, another officer joined in the arrest after it was initiated and one drove the police van, Kowalczyk said.

The autopsy hasn’t yielded many answers in Gray’s death — in fact, it’s prompted more questions — but Baltimore’s mayor pledged Tuesday to find out how the 25-year-old died after being arrested a week prior.

“I’m going to make sure that as we get information that we can confirm, we’re going to put that information out in the public,” Mayor Stephanie Rawlings-Blake said. “I want people to understand that I have no interest in hiding information, holding back information.”

She’s frustrated, she said, and among the questions she wants answered are: Why did police stop Gray in the first place? And why did arresting officers make what she called the mistake of not immediately requesting medical attention when Gray asked for it?

“He was dragged a bit, but then you see him using his legs to get into the van, so he was able-bodied when he was in the van, and we know that when he was finally taken out of the van, he was unresponsive,” she said.

Challenged on the “able-bodied” remark — video shows Gray’s legs hanging listlessly as officers carry him by his shoulders — Rawlings-Blake said the medical examiner would make the final determination, but “we know he was fine getting into the van.”

“We will get to the bottom of it, and we will go where the facts lead us,” she said. “We will hold people accountable if we find there was wrongdoing.”

She further said she “absolutely believes we need to have an outside investigation,” especially when Baltimore’s dark history of police misconduct is considered.

The Justice Department has been watching developments in the Gray case and is officially looking into whether a prosecutable civil rights violation occurred, a spokesperson said Tuesday.

In October, the Justice Department announced a collaborative reform initiative with the Baltimore Police Department to “include an assessment of policies, training and operations as they relate to use of force and interactions with citizens.”

Police brutality not on rise; coverage is

“When law enforcement misconduct is uncovered, the U.S. Department of Justice has a variety of tools available to respond. Responses to misconduct in law enforcement organizations fall along a continuum of intervention, with the specific response calibrated to address the particular circumstances of any given situation,” Ronald Davis, director of the Justice Department’s Office of Community Oriented Policing Services, said in a statement at the time.

The Justice Department began the data-gathering stage of the lengthy process in January and held its first public town hall last week at Coppin State University. It was attended by hundreds of residents, many of whom sounded off about their experiences with Baltimore police.

“Right now, we are past the stage of implementing policies and procedures. This is a state of emergency right now,” Tawanda Jones told Justice Department officials, according to CNN affiliate WBAL. Jones’ brother, Tyrone West, died in police custody in 2013.

The mayor issued a statement ahead of the town hall, saying that 230 officers accused of misconduct between January 2012 and February 2015 had accepted punishment outright, while another 61 officers were found guilty through trial board hearings. BPD is the nation’s eighth-largest police force with almost 4,000 civilian and sworn personnel.

“I am determined to not allow a small handful of bad actors tarnish the reputation of the overwhelming majority of police officers putting their lives in danger to make Baltimore a safer city,” Rawlings-Blake said in the statement.

The mayor had asked the Justice Department to take a look at the police department, The Baltimore Sun reported, saying that her request came on the heels of the newspaper’s report that the city had paid almost $6 million in judgments and settlements in 102 police misconduct civil suits since 2011. Overwhelmingly, The Sun reported, the people involved in the incidents that sparked the lawsuits were cleared of criminal charges.

Baltimore mayor: We’re committed to getting this right 02:57
PLAY VIDEO

Under Rawlings-Blake’s watch, she said, the city has seen a decline in lawsuits, as well as reports of excessive force and discourtesy.

“I went to Annapolis for tougher laws to hold cops accountable. I’m fighting to bring back the trust between the police and the community,” she said.

Gray’s death is not bolstering that trust. Outrage was apparent at protests Monday, the day after he died.

Outside a Baltimore Police Department precinct, demonstrators co-opted slogans from other high-profile police shootings. They chanted — “Hands up! Don’t shoot!” and “I can’t breathe!” — and carried signs saying, “No justice, no peace!” and “Black lives matter.”

Sharon Black, one of the rally’s organizers, said police misconduct is routine in Baltimore, and described Gray’s death as the “straw that broke the camel’s back.”

“The police act in an unrestrained and abusive way,” she said.

The autopsy said Gray died from a severe spinal cord injury, but Baltimore Deputy Police Commissioner Jerry Rodriguez told reporters Monday that there is no indication how the injury occurred.

Of the six suspended officers, none “describes using any force against Mr. Gray,” Rodriguez said.

Police plan to conclude their investigation by Friday, May 1, Police Commissioner Anthony Batts said. From there, the case will go to the state’s attorney’s office, which will decide whether to file charges.

According to documents obtained Monday, the April 12 incident began when Gray ran from police.

While the court documents allege that one of the arresting officers, Garrett Miller, took Gray into custody after finding a switchblade in his pocket, the Gray family attorney called the allegation a “sideshow.” Gray was carrying a “pocket knife of legal size,” attorney William Murphy said.

Police never saw the knife and chased Gray only after he took off running, the attorney said.

“The officer noticed a knife clipped to the inside of (Gray’s) front right pants pocket. The defendant was arrested without force or incident,” the documents say. “The knife was recovered by this officer and found to be a spring assisted, one-hand-operated knife.”

The mayor has questioned whether police should have pursued Gray in the first place.

“It is not necessarily probable cause to chase someone. So, we still have questions,” Rawlings-Blake said.

Gray was in perfect health until police chased and tackled him, Murphy said. Less than an hour later, he was on his way to a trauma clinic with a spinal injury, where he fell into a coma.

The family has not seen the autopsy report yet, Murphy said, and relatives are still waiting to take possession of Gray’s body. The family intends to have a second, private autopsy conducted once Baltimore police turn over the body, the attorney said.

Police, according to their own timeline, spotted Gray, gave chase, caught him, cuffed him and requested a paddy wagon in fewer than four minutes. The transport van left with Gray about 11 minutes after that, police said, and another 30 minutes passed before “units request paramedics to the Western District to transport the suspect to an area hospital.”

When cell phones began recording, Gray was already on the ground with three officers kneeling over him. He let out long screams.

Officers had encountered him a minute earlier in an area where drug deals and crime are common, Deputy Police Commissioner Rodriguez said. Gray has an extensive criminal history, which appears to be mostly drug-related.

The officers called for a prisoner transport van. Cell phone video taken from two positions showed officers lifting Gray, whose hands were cuffed, by his shoulders and dragging him to the back of the van.

Officers put more restraints on Gray inside the van, police said, while surveillance video recorded him conscious and talking. That was at 8:54 a.m.

At 9:24 a.m., police called an ambulance to pick Gray up. Murphy and angry residents of Baltimore want to know what happened in those 30 minutes in between.

Police said Gray requested medical attention, including an inhaler, and an ambulance later took him to the University of Maryland Medical Center’s Shock Trauma Center.

“He lapsed into a coma, died, was resuscitated, stayed in a coma and on Monday underwent extensive surgery at Shock Trauma to save his life,” Murphy said. “He clung to life for seven days.”

What we know and don’t know about Gray’s death 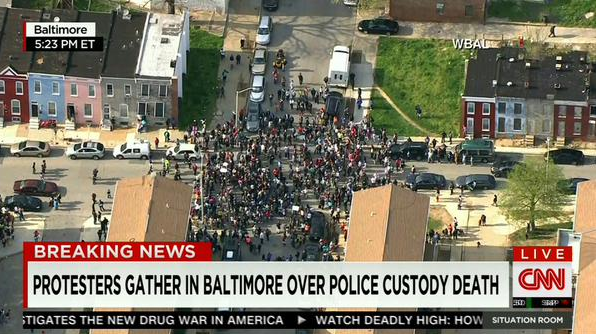 Previous Police, tactical units on scene of standoff in Overland near Ferguson, Mo