An LAPD officer was charged with assault Monday after surveillance video emerged reportedly showing him kicking a suspect in the head.

The incident occurred last October, when 22-year-old Clinton Alford Jr. was stopped by police who thought he matched the description of a robbery suspect. Alford said he ran because the officers did not immediately identify themselves as cops. 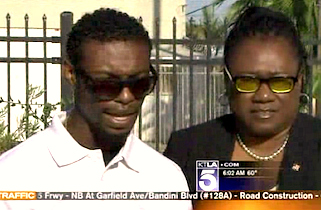 According to surveillance footage captured from a nearby building Alford then got onto the ground with his hands behind his head, but was beaten and tased anyway.

The LAPD has not released the footage. However, according to the Los Angeles Times, authorities who had seen the tape called the beating “horrific” and said officer Richard Garcia kicked Alford’s head like a “football player kicking a field goal.”

The 34-year-old officer was charged with one count of felony assault, to which he pled not guilty, while the other officers present have been reassigned.

Watch the KTLA-TV clip below: