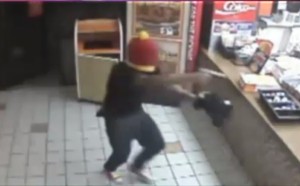 After a fast food restaurant was robbed at gunpoint, the pregnant shift manager says she was fired for not paying the stolen money back herself.

Surveillance cameras in a Popeyes in Channelview, Texas, captured an armed man as he walked into the restaurant, jumped the counter and demanded money.

Manager Marissa Holcomb says that the man grabbed her by the collar and told her to empty the register. He got away with nearly $400.

“[He] got what [he] got because that’s what we made within one hour,” Holcomb said.

Holcomb claims that after the robbery, her boss gave her the option of paying the money back or losing her job.

The mom of three, who is five months pregnant with her fourth child, refused to pay back the lost cash, so she was terminated less than two days after the incident.

The franchise says it knows nothing about the ultimatum. It says Holcomb was fired because she had too much money in the register and it wasn’t her first offense.

Watch the “Real Story” clip below.

Next Read This Defendant’s Epic Legal Rant: ‘F*ck This Court…I AM Justice’