A state of emergency was declared in Baltimore, Maryland tonight as the city transformed into ‘an absolute war zone’ following the funeral of Freddie Gray.

In response to the rioting in Baltimore protesters organized in Ferguson, Missouri tonight.
Local Democratic politician Maria Chappelle Nadal called on protesters to meet up at Reds BBQ tonight.

Everybody come to west florissant

Protesters are calling on supporters now to help them shut down the city.

There were multiple arrests in Ferguson tonight. 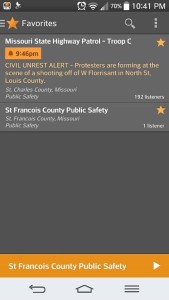 Next FREDDIE GRAY’S ARREST RECORD: Here’s The Rap Sheet Of The Dude They’re Destroying Baltimore Over