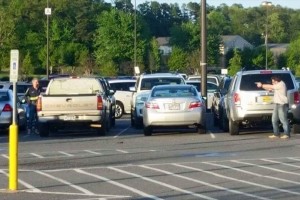 Don’t shop at Kroger in Little Rock Arkansas if you intend to harass old men. You may just get some, or more of what you dish out.As a shopper, Gene, walked in the parking lot, he saw an elderly man surrounded by seven men. He called 911 and drew his weapon. As the crowd gathered, video was shot and more phone calls were made to the police. Gene has been a CCW license holder for several years.

Breitbart reported: Police Sgt. Cassandra Davis commented on the incident by stressing the need for caution in deciding when it is time to pull a gun and intervene. But she made clear, “If you feel that pulling your weapon or using your weapon would stop an individual from taking your life or an individuals life, then you have the right to do so.”​

The man refused to press charges even though the attack from the young men, who were related to the victim, left him bloody from the event.

See the link to this story for video of the event.

A group “Mom’s Demand Action” is an organization in Arkansas that works to disarm good samaritans like Gene. Fortunately they have been unsuccessful.

Next Here Are The 21 Most Ironic And Ridiculous Ways People Have Died. #5… SERIOUSLY?!