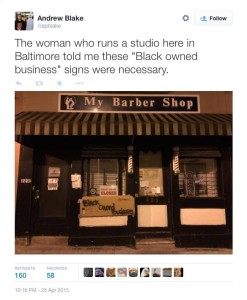 The rioters and looters masquerading as “Black Lives Matter” protesters in Baltimore understand that police brutality – even if proven in Freddie Gray’s case – far underlies what will happen to the black community if the flood of illegal aliens into our country continues, right?

Doubtful. Not enough black “leaders” are arguing that case for it to be headline news.

Just wait until the country is overrun with low-skilled workers taking predominantly black jobs. I’m very curious to see the reaction from the far-left, because a choice will have to be made: do we support black Americans, or illegal aliens?

All these protestors want is to see racial injustice. Even when a man like Gray runs from the cops, it’s somehow always the fault of the police force.
Now, as it has been plastered all over the news in recent days, I’m sure you’ve seen terrible images of policemen being badly injured and Maryland businesses being thrashed. The people committing these crimes are thugs who wish to incite violence for no reason other than to send a message regarding slavery that took place 150+ years ago.

The Mayor of Baltimore, Stephanie Rawlings-Blake – who made this ridiculous comment the other day regarding the protests – just came out and said that citywide curfews will be implemented.

While it’s a necessary measure to take, it won’t deter violence. These protestors are out for blood; blood of police; blood of innocent caucasians; blood of anyone who dares to stand in their way.

What is the end game here? Is it to destroy the city and wind up with a newly stolen pair of clothes?

Next [VIDEO] Baltimore Mom Catches Son Among Rioters, Proceeds To Kick His ASS