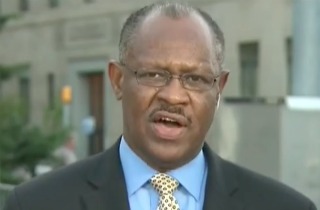 A Baltimore councilman got frustrated during a clash with CNN’s Erin Burnett earlier tonight about calling the violent protesters “thugs,” and dropped the n-word. Both the mayor of Baltimore and President Obama used that word in denouncing some of what happened last night.

Burnett brought that up and asked, “Isn’t it the right word?” Councilman Carl Stokes said, “No, of course it’s not the right word to call our children thugs.”

Burnett challenged him on the horrible actions of what she thinks could reasonably be called thugs. Stokes responded by saying “just call them niggers,” very strongly intimating that’s what “thug” is basically getting at.

He told Burnett he doubted she would call her own child a thug, but Burnett said if a child of hers ever rioted like that, she probably would.

Watch the exchange below, via CNN:

Next [REPORT] Prisoner Who Was With Freddie Gray: "He Was Intentionally Trying To Injure Himself"