Currently it is being reported by several websites and across social media that Freddie Gray suffered a spinal injury only a week before his death.

The investigation into Freddie Gray’s death will be complete by Friday. However, the same media reports are saying the results will not be made immediately public. This is odd considering the surrounding ideology of Baltimore which would be highly favorable to a finding of wrongdoing by the police. 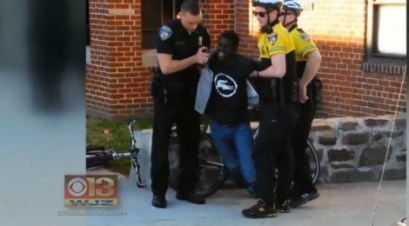 If the investigation revealed police wrongdoing there is nothing in the Baltimore political apparatus which would keep it hidden from public. Ergo, there’s a possibility any report would contain exculpatory information beneficial to the police.

Which brings us to a potential game changing discovery showing up in some social media about Freddie Gray having spinal surgery shortly before the events outlined within the controversial encounter. It must be noted however, that none of this is factually confirmed and we should research further.

However, a blogger who happens to be a former police officer has pointed out that the court records being circulated actually show Freddie Gray as the defendant in a court case, not as the plaintiff, and it has nothing to do with medical reasons.

Rumours about a lawsuit involving Freddie Gray and Allstate insurance began flying around social media late today. One site in particular, The Fourth Estate, was apparently more concerned about being first than they were about being right.
Quoting anonymous sources, they reported, quite definitively, that Freddie Gray sustained spinal injuries in an accident and had endured several unsuccessful spinal fusion surgeries. One just weeks prior to his arrest by Baltimore Police. They wrote this: “

The Fourth Estate has contacted sources who allege that Freddie Gray received spinal and neck surgery a week before we was arrested, and was allegedly receiving a large structured settlement from Allstate Insurance.  The surgery is allegedly related to a car accident in which Gray was involved.”None of this however is true. In my opinion, it was both highly unethical and irresponsible for The Fourth Estate to print that story.

An examination of court records reveals that Freddie Gray was not suing Allstate, but was in fact the defendant in a case where Peachtree Settlement Funding was the plaintiff and Allstate an interested party.

It is quite clear that this was litigation part and parcel to a settlement awarded the Gray family pursuant to their former landlord not properly removing lead paint from the home in which they lived.

The initial suit was filed by Carolina Gray, Freddie Gray’s sister in Baltimore City Circuit Court in 2008 and settled in 2010. Four years later a suit regarding the purchase of the settlement was filed in Howard County Circuit Court by Peachtree Settlement Funding, and dismissed on April 2 of this year.

Some are noting different case numbers as an indication that the cases are unrelated, but that is not correct. Peachtree was not a party to the initial action in which the settlement was awarded, but rather purchased the settlement after the case was closed. Then, for an unknown business reason (as is common in commercial litigation) Peachtree sued the Gray family in a different county under a new case number, ultimately seeing the case dismissed. So while the case numbers and venues are different, the cases are related.

Another prisoner was put into the van while Gray was still responsive and communicative. What happened between that prisoner and Gray? Gray died in a hospital a week after his arrest. Was medical malpractice to blame?We do not know, but the narrative being portrayed across social media isn’t accurate and hopefully this will clarify and put the false narrative to bed.

Next [VIDEO] Woman Arrested After Facebook Threat: "Death to All White Cops Nationwide"