His wife and children already asleep, Richard Specht was lying on the couch of his Sound Beach home Wednesday night, about ready to turn in himself, when he opened the email.

A night earlier, a waitress had emailed Specht and told him that she had a picture of something that was really incredible, but she wasn’t sure if she should send it. Specht emailed her back and told her that he couldn’t offer his opinion since he didn’t know what she was referencing. 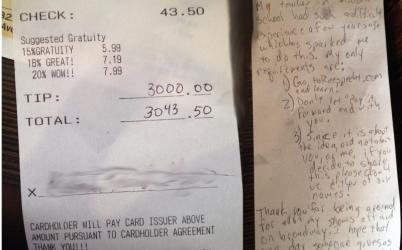 On Wednesday night, he found out. The waitress sent the photo. It shows a recent receipt from the restaurant where the waitress works. The total on the bill before tip: $43.50. The total after: $3,043.50.

A man the waitress knew and who she had supported through his life’s endeavors left her a 6,897 percent tip. Next to the receipt is a note the man wrote to the waitress explaining why he left the $3,000 tip.

The note begins: “Thank you for your kindness and humility. My teacher in middle school had such a difficult experience a few years ago which has sparked me to do this.”

That teacher was Richard Specht. Richard and Samantha Specht went through the unthinkable in 2012. Their 22-month-old son Richard Edwin-Ehmer Specht drowned in a pond in the family’s backyard just days before Hurricane Sandy.

Since then, the Spechts have made it their mission, through their foundation ReesSpecht Life, to inspire people to pay kindness forward in memory of their son, who was affectionately known as “Rees” for his initials.

Richard Specht wrote a children’s book, “ A Little Rees Specht Cultivates Kindness,” last year. It tells the story of a young farmer named Little Rees Specht who discovers that kindness, like a seed, will only grow and spread if one takes the time to cultivate it.

That email. That receipt, though. That was not something Richard Specht was ever expecting.

“I couldn’t believe it,” Specht said of when he first opened the email. “I started crying. There are pictures of my son everywhere and I was just looking at them saying ’I can’t believe this is something that you helped to inspire.”

Specht’s former student who left the tip did leave a few requirements for the waitress who accepted it:

And the note concludes: “Thanks for always being around for all of my shows off and on broadway. I hope that one day someone gives as much love and happiness into the world as you do.” 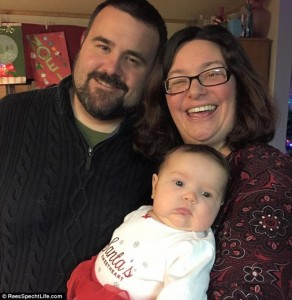 Both Richard and his wife, Samantha Specht, are teachers at in the Smithtown School District. Specht says he fondly remembers teaching the customer and that he isn’t at all surprised by his generosity, but continues to marvel at the kind way people are treating others, thanks in part to his family’s efforts.

The Specht family started ReesSpecht Life, which is named for their son, whose nickname was Rees, after realizing no one in their community would accept anything from them in return for supporting them through the tragic loss of their child.

In recent times, several stories have emerged about people paying for strangers’ meals at restaurants or picking up the tab for them at drive-through establishments. One of the more well-known campaigns is called Tips for Jesus, which encourages restaurant customers to leave generous tips for their waitstaff and post photos of their receipts on a related Instagram account, reports the Milford Daily News.

In January 2014, a San Francisco waitress received a $3,000 tip from an anonymous customer who also paid for a fellow customer’s meal. Instead of signing his name on the receipt, he simply wrote, “Tips for Jesus.”


Previous PRIVACY ALERT: If you have an iPhone or Android it could be tracking your every move, and heres how to tell and what to do.