Have you ever noticed that most of the liberal tyrant Democrats seem to congregate in large cities while most conservative and patriotic people, generally known as Republicans, live in more rural areas? That’s why the real heart of America is generally found away from the busy, nosy limits of large cities. Just look at the red-blue maps of the last couple presidential elections and you’ll see what I mean. 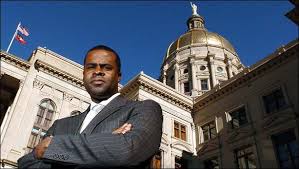 Atlanta, Georgia, is no different. While many places in the state are God-loving, gun-owning loyal American conservatives, Atlanta is the liberal anti-American center of the state. Mayor Kasim Reed literally worships the ground Barack Obama walks on and readily adheres to everything he says and does, especially when Obama utters his illegal immigration policies.

Reed is in full support of Obama’s welcoming illegals into the US and giving them everything they need and want. He has also made it known that he strongly opposes the lawsuit filed by 26 states, including Georgia, to block Obama’s delayed deportation program. In fact, Reed is willing to give illegals the keys to the city and help them open every door in the city. In a recent statement, Reed said: