Musick has Charms to sooth a savage Breast,
To soften Rocks, or bend a knotted Oak.

William Congreve, in The Mourning Bride, 1697

Dimitri Reeves decided to add his own special touch of expression to the Baltimore chaos by dancing his way into the spotlight during the riots. UNILADtv posted this great video of Dimitri, and his talent, along with the influence it seems to have had in redirecting the atmosphere from violence to street party.

He managed to draw a crowd even though the helicopters were buzzing, overhead and sirens were screeching in the background.

It’s definitely a more alternative way of demonstrating. And Dimitri himself took to Twitter to enforce that: “Spread love and peace never violence.” 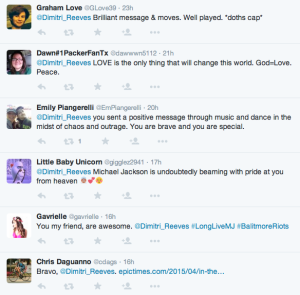 Get all the latest headlines with the Free DAILY HEADLINES APP!

More great stories you may have missed!

Yes, it’s a real product and you’ve never heard such straight forward “conversation” about this bodily function from a woman. It’s PooPourri and it supposedly …

In a DAILY HEADLINES EXCLUSIVE, first reported here, The Bundy’s have been working in the Nevada legislature to secure state sovereignty in Nevada and across …

Next [PHOTO] This Public Library is Promoting Abortion and Kiddie Sex