Dr. Michael Salzhauer is a Miami-based plastic surgeon who you might know better by his social media alias: TheRealDrMiami. The 43-year-old doctor is becoming famous for broadcasting his surgeries on Snapchat in all their bloody gruesomeness.

He got the idea to use Snapchat when his Instagram account was disabled and his 15-year-old daughter introduced him to a slightly-more-forgiving-about-nudity social media network.

“I was really frustrated,” Salzhauer told BuzzFeed.”I woke up one morning with zero followers and was like, what else can I do to show people what we do here?”

This is Dr. Michael Salzhauer, a Miami-based plastic surgeon. 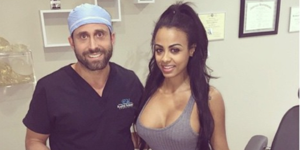 All of the patients allegedly sign consent forms before their surgeries are filmed and put onto Snapchat, and, according to him, about half of his customers are happy to do it.

The account has amassed hundreds of thousands of followers and, according to him, quintupled his business. He also seems proud of sharing the intricate bodily details of what has, until now, been a procedure that could only be viewed by a select few behind closed doors.

“This is the reality of plastic surgery and I want people to see it,” he said.

You might know Salzhauer by his Snapchat name, TheRealDrMiami, where he broadcasts his surgeries daily to around 100,000 people.

“This is the reality of plastic surgery in Miami today, and I want people to see it,” he told BuzzFeed News.
The numbers are impressive on their own, but especially when you take into account that Salzhauer’s clips are often 20 to 30 minutes long, all in 10-second bursts of the daily goings-on at his practice, Bal Harbour Plastic Surgery.

As far as he knows, he says, he’s the first surgeon to broadcast on Snapchat.

The 43-year-old said Instagram deleted his account a few months ago, an account that had amassed nearly 90,000 followers, so his 15-year-old daughter introduced him to Snapchat.

“I was really frustrated,” Salzhauer, who has been a surgeon for 19 years and has had a practice for 12, told BuzzFeed News. “I woke up one morning with zero followers and was like, what else can I do to show people what we do here?”

The next day Salzhauer signed up for the social network, and 2,000 people tuned in to see him do routine cosmetic surgeries like liposuction, tummy tucks, and butt lifts.

“I didn’t know if that was a lot or a little,” he recalled, laughing. “I came home and showed my daughter and her eyes popped out of her head. She was like, ‘That’s a lot, dad.’”

Now, the doc gets 50 times as many viewers tuning in for his gruesome surgery scenes and says his business has increased from booking 15–20 appointments a day to around 80–100. He claims he’s fully booked through July 2016.

“I put my work out there. … I’ve had 10,000 patients, no one’s ever died, no one’s ever not woken up. This puts the whole process in perspective for people; they can relate to it, they can see how it’s going on in real time, and it makes them comfortable with the idea.”

And of course the social-media-loving doctor is back and stronger than ever on Instagram, where he shows off his patients’ results to his roughly 125,000 followers.

Salzhauer thinks seeing the before-and-after pictures on the networks helps people considering plastic surgery feel like they can trust him.

“They say, ‘This guy can do this for me, [he] can make me feel better about my body.’ So they want to wait for me; they’re willing. Which I think is pretty cool.”

He’s also hired two full-time employees to run his social media accounts, jobs that include filming a few minutes of each surgery and answering viewer questions. And yes, the patients sign a consent form before being Snapchatted.

It’s not particularly hard to get patients on board with being filmed, either.

“About half my patients want nothing to do with it,” he said. “The other half are remarkably open to it, and a lot of the patients come in requesting to be on Snapchat. Some of them want their boyfriend’s name written on their back or their favorite band, like, ‘Shout out this person!’”

Though many of the chats feature graphic surgical moments, together they often feel like a reality show, featuring monologues from Salzhauer on his home life as he walks to work, conversations with his employees, and snaps of their current tunes.

But the doctor said he prefers the social media fame to having an actual TV show.

“I think this is better,” he said. “There’s no commercials. And there’s no censorship.”

Out of the thousands of messages he says he gets each week, Salzhauer said only a few are critical, and are mainly “questions about HIPAA violations and an occasional person saying, ‘Shouldn’t you be paying more attention?’”

But Salzhauer counters that out of a two-hour operation the Snapchats only show about four minutes of it, and that he’s done the procedures every day for years.

“The other one hour and 56 minutes, I’m focused on the surgery,” he said. “It’s not like I’m talking the entire time while I’m operating.”

So why the fascination? As he sees it, “just about every person on the planet” has a part of their body they want to alter, and watching the surgeries proves it’s actually attainable.

“In every aspect of our lives we try to do better. Build nicer houses, build nicer cars, become smarter,” he said. “Why not have better bodies?”