Manny Pacquiao and his fight promoters have been hit with a class action lawsuit by people who claim he screwed fans, Pay-per-view buyers and gamblers out of serious money by not disclosing his shoulder injury before the Mayweather fight.

TMZ Sports has obtained the lawsuit filed in federal court in Nevada … in which Stephane Vanel and Kami Rahbaran are suing on behalf of a class that feel cheated.

In the suit,  Vanel and Rahbaran claim they are fighting “on behalf of all persons who purchased tickets; purchased the pay-per-view event; or who wagered money on the event.” 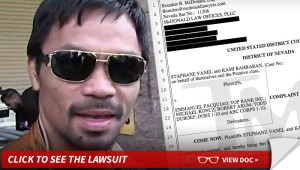 The plaintiffs are suing Pacquiao, Bob Arum, Top Rank Boxing and others for consumer fraud — and they’re demanding at least $5 MILLION in damages.


Previous [WATCH] This Alien like creature Shoots a creepy web of Goo; Totally gross not for the squeamish....