The 4-year-old boy was frisked by airport security and then forced to surrender his plastic toy gun after he was considered a security risk. 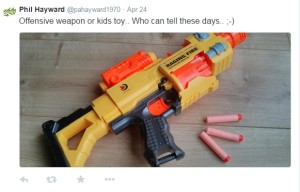 (Scroll down for video) A boy of South Yorkshire, United Kingdom, was treated as a criminal at an airport.

The 4-year-old boy was frisked by airport security and then forced to surrender his plastic toy gun after he was considered a security risk.

James Hayward had arrived at the East Midlands Airport with his parents, Phil, 44, and Hazel, 38. He had a yellow and orange toy gun in his luggage.

The Hayward family was en route to Lanzarote, Spain, when he was given a body search and his $9 toy was taken.


Phil Hayward said that airport personnel placed the gun through the x-ray machine and they saw that it was a toy gun that shoots darts. However, they still confiscated the child’s toy and gave him a pat down.

The family left without the toy gun as they did not want to miss their flight.

“I explained to James that I can get him a new one when we returned from our 10-day vacation,” Phil said.

“I thought it was a bit overzealous considering how many people were trying to get through. No wonder it was taking so long if they pat down children,” he added.

Next [WATCH] This Mayor got caught with a hot mic; City councilwoman had just begun to talk about the serious issue of antibiotic resistance when he excused himself and walked out.