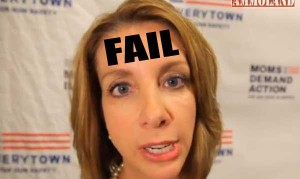 “World’s Longest Receipt” is a boycott of Kroger whereby Moms Demand Action is asking supporters to shop at a Kroger competitor, then submit the receipt on a Moms Demand Action website (groceriesnotguns.com)  to help keep a running tally.

It’s a shame that Kroger President & COO Rodney Ellis and CEO W. Rodney McMullen will not listen to their customers and employees to follow the lead of their competitors and prohibit the open carry of arms in their stores… In all states, businesses have an obligation to protect their employees and patrons and until Kroger steps up, Moms will put our money where our mouths are and shop at stores [that ban law-abiding citizens from openly carrying firearms].

Contrary to Watts’s claims, Kroger’s customers voted with their wallets and that vote resulted in a “21 percent” increase in profits for Kroger after the grocer refused to ban guns.

This is why Kroger CFO Michael Schlotman has made clear that the grocery chain is rejecting Moms Demand Action’s efforts to to disarm open-carry customers in states where openly carrying a gun in Kroger is legal. During an March 25 appearance on CNBC’s Squawk Box, Scholtman cited Moms Demand Action’s opposition to law-abiding citizens openly carrying guns for self-defense, then said:

So we follow local laws [and] we ask our customers to be respectful to the other people they are shopping with. And we really haven’t had any issues inside of our stores as a result of that.

Yet Moms Demand Action is determined to teach Kroger a lesson. So they invite moms to quit shopping at Kroger, Harris Teeter, and Fred Meyer, and instead shop at a competitor like Whole Foods, Target, or Sprouts.

This is all an outgrowth of their “Groceries Not Guns” campaign.