The Department of Justice is “monitoring” Gun Cave Indoor Firing Range owner Jan Morgan in Hot Springs, Arkansas, for banning Muslims from shooting in the facility.

At that time, Fox News reported that Morgan decided to ban Muslims after “two customers she deemed suspicious” showed up in September. Since that time, she has excluded those “she believes to be Muslim based upon their names.”

She said, “We are dealing in lethal firearms. I am not going to let a Nazi shoot in here, or a Ku Klux Klan member in here, either.” 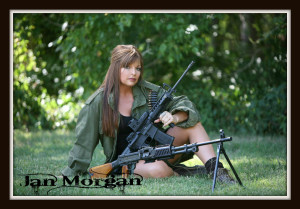 AmmoLand News reported that the Council on American-Islamic Relations (CAIR) wrote a letter to Attorney General Eric Holder asking him to intervene. In the letter, CAIR said;

“Given the recent spike in anti-Muslim rhetoric, including Islamophobic statements by government officials, community leaders and media outlets, death threats, and other bias incidents targeting Muslims, I urge you to investigate this matter soon.”

The ACLU also asked the DOJ to intervene.

And now, the DOJ says it is “monitoring the situation.”

According to The Washington Post, the DOJ has not provided details indicating any investigation has been opened, but CAIR is pleased that the DOJ has become involved, and they hope it will lead to an investigation in the future.

CAIR’s Jennifer Wicks said, “We welcome this positive development and hope it leads to a thorough investigation of clear violations of the civil rights of American Muslims and those perceived to be Muslim by the gun range owner.”

In January, “A South Asian father and son accused Morgan’s business of turning them away.” They claimed Morgan assumed they were Muslim because their skin was brown. The identities of the two are not known because they demanded anonymity “out of safety concerns.”

Morgan rejected their claims, stating it was their behavior, not their skin color, that led her to think they “might not be safe handling firearms in [her] range.” Morgan made clear that her range does not discriminate based on skin color, and explained her belief that the South Asian father and son applied to shoot with an “agenda.” She said their actions were “clearly designed to create the situation that occurred.”

Previous What Do Women Do To Protect Themselves When They Can't Carry Guns? Is It Effective?