Over the past decade, there have been two reports of open carriers being attacked.

In one case, the attacker tried to grab the openly carried pistol; in the other case, the reason for the attack is unknown.  Both attacks failed.

There have been two other reports of open carriers having their firearm stolen.  One of those cases was in an area where an openly carried firearm was required to be unloaded. 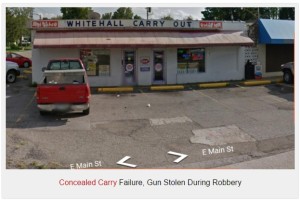 It is more likely for concealed carriers to be attacked, because the attackers do not know that they are armed.   The vast majority of criminals do not want to attack an armed person.   Sometimes the attacks fail, sometimes they succeed.  There are advantages and disadvantages to both concealed carry and open carry; it is foolish to claim that one or the other is “best” all the time.  I carry both ways, as the purpose and circumstances seem best to me. I like to keep options.   Here is the latest likely instance of a concealed carrier being attacked and his gun stolen.

On 12 April, 2015, there was another attack on an likely concealed carrier.  It occurred at the Whitehall Carry Out in Whitehall, Ohio.   A man who had a firearm in a holster was robbed at gunpoint by two men who had asked him for change before he entered a store to buy lottery tickets.  When he exited the store, they accosted him at gunpoint.

It seems unlikely that the pistol was carried openly, as there is no report of the robbers telling the man to disarm during the robbery; and it is reported that during a struggle, the pistol fell out of the holster.    From thisweeknews.com:

The man told police he was walking to the store to buy lottery tickets when two men asked him for change. The man said he had none and went inside the store.

After exiting, one of the men pointed a gun at him and said, “Don’t get shot over change.”

The victim, armed with his own gun, fought the man, reports said.

During the struggle, the victim’s pistol fell from its holster, police said.

Reports said the two men took the victim’s gun and his lottery tickets and fled in a vehicle.

It is clear that the robbers were reluctant to shoot, or that the firearm that they used was either non-functional or a fake.  A significant percentage of criminals’ guns are non-functional.

While no mention was made of a concealed carry weapons permit, it seems likely that the pistol was being carried concealed.   It is rare to see an open carrier that does not have a retention system on their holsters, while it is common for concealed carriers to carry inside the waistband holsters with no retention system.

The report reinforces the wisdom of having a retention system of some sort on a firearm holster, if simply for retaining the pistol during a fall or violent movements, such as may occur in an accident or during exercise.  Retention during a fight is even more important.

Alert readers are asked to report any more details of this event that they may come across.


Previous WHY Would A School Suspend A Girl For Advocating Abstinence And/Or Condoms In Sex Ed Class?