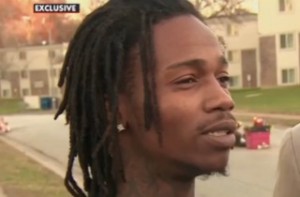 When the eyes of the world were on Ferguson last year, one of the people who witnessed Michael Brown‘s shooting was his friend Dorian Johnson. Johnson rebutted much of what Officer Darren Wilson said happened (though since then, the Justice Department concluded there was not enough evidence to charge Wilson and to say Brown had his hands up).

Johnson said that Wilson was hostile from the beginning and left out his attitude in interacting with him and Brown. He said that Brown and Wilson weren’t “wrestling” in the car, “it was tug of war.” It should be noted, however, that a simple Google search yields over 500,000 results for Dorian Johnson having lied on multiple occasions.

And the way Wilson recounts it, he chased Brown, only for Brown to turn around and charge at him. But Johnson says that Brown turned around and put his hand in his waistband to show Wilson that he wasn’t armed.

But now Johnson is filing a lawsuit, NBC News reports, against both Wilson and the city of Ferguson, claiming he was wrongly stopped and fired on.

Johnson filed the suit days ago, and it reads that “Officer Wilson acted with either deliberate indifference and/or reckless disregard” toward him. “He could have done something different than kill my friend dead in the street.”

The suit also alleges “excessive force” used against both Johnson and Brown, as well as that the city and police chief instigated a biased policing system in town (another conclusion reached by the DOJ).