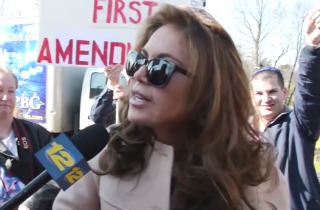 The shooting at a “Draw Muhammad” cartoon contest in Garland, Texas this week has reignited a national debate about free speech, with many scolding the actions of Pamela Geller and the American Freedom Defense Initiative (AFDI)and provoking Muslims to the point where something like the shooting would happen.

One of the people making that argument is Garland Mayor Douglas Athas, who said on Fox News today that what Geller did was “incendiary” and put law enforcement at risk just to provoke. Even some Fox News anchors have expressed similar views.

Well, Geller responded in a piece for Time magazine today, declaring that she refuses to kowtow to the whims of radical jihadists. On the question of blame, she asks, “Are the Jews responsible for the Nazis? Are the Christians in the Middle East responsible for being persecuted by Muslims?”

Geller says the shooting proves everything she’s been saying about radical Islam and that “allowing this sort of censorship would mean nothing less civilizational suicide.”

Geller also responded in an interview with the BBC, specifically scolding Mayor Athas:

“That’s like saying that the pretty girl was responsible for her own rape. The mayor is going after the defenders of free speech and clearly giving a free pass to the savages who came with guns who came to kill innocent people.”

You can listen to the audio below, via BBC Radio:

Previous [WATCH] If You Couldn't Attend, Here's The Full Video of The Texas Muhammad Art Exhibit