[Shocking Texts] The extremely graphic text of that conversation is below:

In one disturbing conversation, the babysitter allegedly fantasized about kidnapping a young girl and bringing her to Schuneman in a car, where the two would rape her. 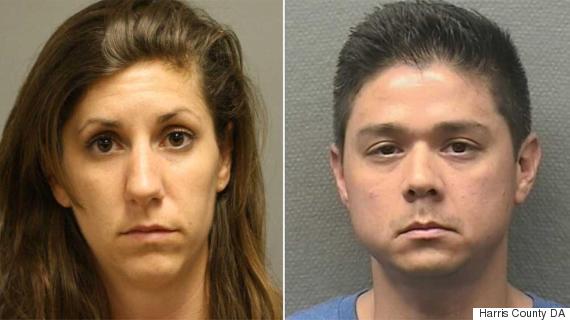 Ashley Dack and Patrick Schuneman
A Texas babysitter’s text messages paint a horrifying picture of abuse that includes sexually assaulting children as young as 11 months old and detailing the acts to her boyfriend, prosecutors say.

Some of the graphic exchanges between Ashley Dack, 29, and Patrick Schuneman, 37, were released in court documents obtained by The Huffington Post. The couple — who are both successful geologists for oil companies — was arrested after Dack allegedly bragged about the sexual abuse to one of her friends, who called police.

The documented assaults date back to 2012, according to Tiffany Dupree, a lead prosecutor in the case. She said the Houston woman would offer to babysit children so she had easy access to them.


In one disturbing conversation, the babysitter allegedly fantasized about kidnapping a young girl and bringing her to Schuneman in a car, where the two would rape her.

The extremely graphic text of that conversation is below:

Dack: Oh honey? I never know. There is a little girl at lunch with blonde pig tails, kept dancing around on the floor. Wanted you 2 be hiding in my car and I could bring her 2 you. Maybe 4 [years of age].

Schuneman: Would love that. Would you join us or leave us alone?

Dack: Join you. We could use the seat belt to hold her down and wrap around her neck so she couldn’t wiggle because it would get tighter and tighter.

Schuneman: She’d be so scared.

Dack: But no one could hear her if we were in my car.

Schuneman: I would hold her neck and head as you pulled her pants off.

On July 10, 2013, Schuneman texted to Dack, “Gonna get our pics 2night?” Dack allegedly responded with a photo showing her sexually assaulting a young girl with her fingers. Schuneman responded with, “Best ever seen,” and “Thank you so much for my gift. Sweet dreams.”

The pair named their alleged victims, and police found that they committed most of the abuse while Dack was babysitting, according to court documents. In the text conversation below, The Huffington Post has redacted words that may identify the victim. “Defendant” refers to Schuneman:

In October last year, Dack forwarded the messages to a friend, who saved them for deputies at the Harris County Sheriff’s Department. Several of Dack’s friends couldn’t believe it when they heard the news of her arrest.

“When I heard, I was in disbelief — there’s no way, there’s gotta be some misunderstanding,” said one of her friends from Boise State University, where she graduated with a degree in geology in 2009. The friend spoke to HuffPost Crime on condition of anonymity.

“I would never see her as doing that. She seemed perfectly normal. I mean, when people had kids, wanted a night out or whatever, she’d be the person to volunteer to take care of them,” the friend added. “She’d make friends with professors and family, and it wasn’t uncommon for her to watch peoples’ kids as a favor. And nobody would think twice.”

Dack and Schuneman are both charged with super-aggravated child assault and sexual performance by a child under 14. Dack is currently being held on a $350,000 bond, and the court declined bond for Schuneman.

If Dack is somehow able to post bail, the judge ordered that she surrender her passport and must wear an ankle monitor.