After walking home from school, a 13-year-old girl was attacked in her San Jose, California, home by an unknown assailant. Surveillance cameras captured footage of the man following the girl home before he forced his way through the door.

However, the unnamed victim fought her attacker off. Police said he tried to assault her in the foyer, but the man was apparently stopped by her blows to his face. 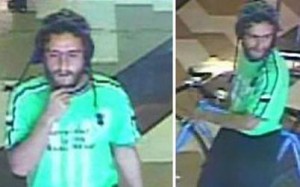 After he left, she hid in the closet and texted her father: “Daddy, come home now. Some guy tried to rape me.”

The teenager said she noticed the man when he approached her on the front porch, told her he was lost, and asked about her name and age. The questions then took an inappropriate turn.


“That’s when I decided to run inside the house because [I’d] already unlocked it,” she told KGO-TV. “I tried to slam the door on him but I couldn’t.”

Police say the man, who hasn’t been caught, also attempted to sexually assault a 28-year-old woman in a grocery store restroom last month.

“We need to put a stop to this immediately,” San Jose Police Sgt. Enrique Garcia said. “We’re really concerned that he’s going to strike again and we need the public’s help.”

Next U.S. Marshals On The Hunt To Find Sex Offender Couple That Targets Teens