Don’t try to find bad actors trying to spread hate through violence…. just cancel the event…. REALLY is this America?

On Thursday, we reported that ISIS had released an online statement claiming that they had highly-trained operatives in 15 US states ready to attack innocent US civilians. In that statement, ISIS issued a warning to 5 states in particular: Virginia, Maryland, Illinois, California, and Michigan.

Now, it looks like one of the other ten unnamed states is Florida.

Friday, I had a conversation with a stellar young man who is the Chairman of the Palm Beach County Republican Party — Michael Barnett. I could hear the anxiety and sorrow in his voice as he tried to lead me into the topic — so I knew it wasn’t good. Annually the Palm Beach GOP has an event called “Lobsterfest” which is one of their major fundraisers. This year’s invited guest speaker is none other than The Netherlands MP Geert Wilders — yes, the same individual who was at the “Draw Mohammed” event in Garland, Texas.

Mike’s office had received a visit from the FDLE (Florida Department of Law Enforcement) and the FBI JTTF (Joint Terrorism Task Force). They confided that the Islamic jihadists are at it on the internet, and they’re picking up chatter regarding the Palm Beach event. Now, instead of saying, we’re pursuing these bastards and will do everything in our power to find them and kill them first, the recommendation was to cancel the event. …How sad it is that 70 years after V-E Day we are forced to make decisions about our First Amendment right to free speech because of the intolerant, despicable hate of an enemy we have allowed to infiltrate our borders.

What was my recommendation to Michael? Forego having Geert Wilders speak, because of the high risk involved. I personally know Geert and support his stance against the incursion of militant Islamism and Islamo-fascism. If we were on a battlefield this would be an easy call, but there are innocent men and women involved — they are not warriors.

And so I promised Mike I would tell this story in order to alleviate his pain and get folks to understand how absolutely absurd and dire this situation has become. America has been turned into a battlefield and these crazed jihadists have no boundaries in their bloodlust and brutality. The day is coming when we will have to meet their brutality head on… 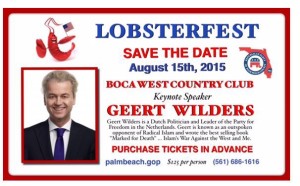 I don’t blame Michael Barnett if he does take my recommendation and decides to cancel Geert Wilders speaking at the Palm Beach event. He’s been placed in an untenable position by the real cowards. …


Previous [WATCH] ISIS Makes Threat Against Major US City and a News Anchor Speaks The Truth about it and Gets BLASTED By the Left and Forced to Apologize for Speaking the TRUTH....