Four Egyptian kids who dared make fun of ISIS in a harmless video are headed for trial along with their teacher on charges of “insulting Islam,” after their Muslim neighbors got hold of the footage and went to police. 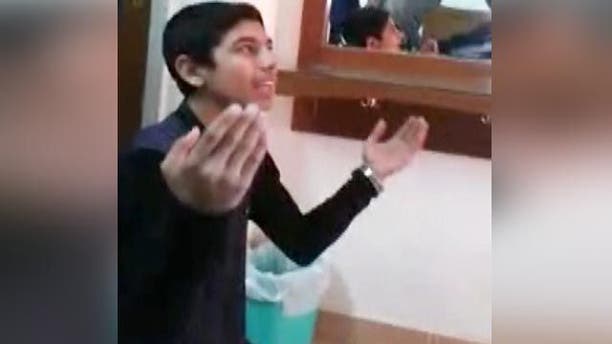 Aged between 15 and 16, the youths could face up to five years in a youth detention center – while the teacher would serve any sentence he receives in prison – if the court finds them guilty of violating Egypt’s blasphemy law, Egypt-focused activists say.

Egyptian Christian and civil rights groups are leading calls for their release, but the five – members of the Coptic community that descends from the non-Arab people whose Pharaohs ruled ancient Egypt – have already spent weeks in police holding cells.

“They are some kids who decided to have fun in a private place,” Mina Thabet, a Coptic activist and researcher at the Egyptian Commission for Rights and Freedoms, told FoxNews.com from Cairo.

“They were on a trip with their teacher, but somehow rumor got out that they’d thrown down the Koran, and had insulted Islam, so that led to their arrests.”

The court proceedings are taking place in Beni Mazar, a city in Minya Governorate some 140 miles south of Cairo.

The teacher, Gad Younan, 42, had been escorting the four boys ­– and a fifth Coptic youth seen in the video – on a faith-based excursion outside their home village of Al-Nasriyah in Minya Governorate.

At some point, the teacher allowed the boys to shoot a video on his cell phone in their hotel room.

Thabet said the 32-second clip ­– provided exclusively to FoxNews.com – fails to support the rumors about the boys having allegedly insulted Islam. Instead, it shows them mocking ISIS by imitating a beheading – a form of execution that has become one of the terror group’s multiple signature atrocities.

“They use some words that are used in Muslim prayers, but they are in no way being disrespectful to Islam,” said Thabet.

“And even if they were, they should have the right to free speech ­­– but in Egypt we have this law.”

Article 98(f) of the Egyptian Penal Code criminalizes a series of faith-related comments, including “insulting a heavenly religion or a sect following it.”

While ISIS purports to adhere to Islam, it is not clear whether the prosecutors in Egypt had that part of the Penal Code in mind when they accused the youths of blasphemy.

When the boys made the video, the ISIS passion for beheading would be uppermost in their minds because a Libyan affiliate of the terror group recently announced the murder of 21 Christians by releasing a video claiming to show jihadists decapitating the group on a beachfront.

Not only were 20 of the murdered Christians Copts, they also had hailed from the boys’ home governorate of Al Minya, and had been in Libya simply to seek work.

In any event, the video ended up in the hands of the youths’ Al-Nasriyah neighbors after Younan either misplaced his phone’s memory card, or posted it on Facebook, according to a report by the Christian monitoring group World Watch Monitor.

More than 2,000 local Muslims then launched a series of marches over three days in order to put pressure on the parents of the children to give up their loved ones to the authorities, witnesses reported.

“There were three or four marches in different places in the village,” Ashraf Salah, the owner of a computer repair shop in Al-Nasriyah, told investigators with World Watch Monitor.

“They were…chanting: ‘With our souls and blood, we will defend you, oh Islam! We will not leave you; we will take revenge for you!”

Salah told how the mobs were “pelting Christian homes with stones” and “pounding threateningly on doors and windows” of shops owned by Coptic Christians.

“They destroyed the door of my shop and they destroyed a photo studio owned by the father of one of the boys,” he said.

Frightened and bullied, the parents of four of the boys handed the teens over to police, while the fifth youth in the video fled to the Egypt’s Red Sea resort city of Sharm el-Sheikh.

“Police said that they arrested (the boys), but they weren’t arrested. We handed them to the police,” Reda Faragalla, 32, the uncle of one of the boys, told World Watch Monitor.

A “reconciliation meeting” between the Muslim and Christian communities in the village ended the way Coptic activists say such gatherings typically end: with the Christian side being essentially forced to offer its apologies and make a series of concessions.

This one ended with the Christians of the village condemning what had happened, and agreeing to ban Younan from the village “in order to preserve his life and to calm the situation,” said their signed avowal document, according to World Watch Monitor.

Next [WATCH] ISIS Makes Threat Against Major US City and a News Anchor Speaks The Truth about it and Gets BLASTED By the Left and Forced to Apologize for Speaking the TRUTH....