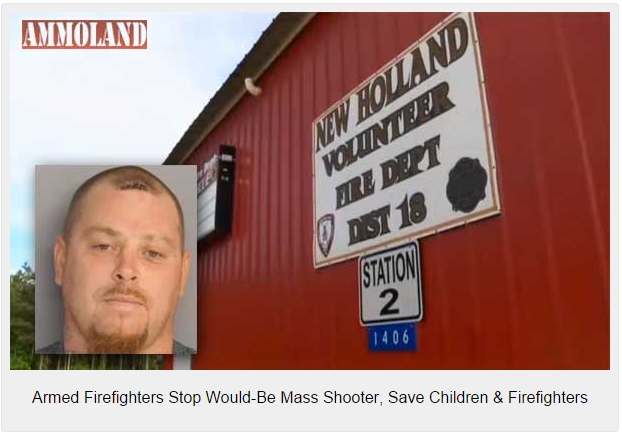 On May 5 2015, two New Holland, Wisconsin firefighters with concealed carry permits stopped a man allegedly attempting to shoot kids and firemen at the fire station.

According to Fox Carolina, “Children and firefighters”were in the station parking lot when, at about 6:30 p.m. at New Holland, Wisconsin’s Fire Station 2, Chad Barker allegedly pulled up, got out of his car, and opened fire. He allegedly fired in the air and at his own vehicle and “pointed the firearm at individual firefighters for lengthy periods of time.”

Firefighter Gary Knoll said, “I came out of the office, saw the man with the gun, told everybody to leave out the back quickly, that there was a man in the parking lot with a gun, and I was not kidding.”

Knoll has his concealed permit, and he had a gun with him, as did another firefighter on the scene. Both approached Barker at gunpoint and talked him into dropping his weapon.

Firefighters then “detained Barker … until deputies arrived and locked him up.”


Barker was charged “with two counts of pointing and presenting a firearm.”

Knoll, happy that he and the other firefighter had concealed permits and had guns on their persons, said, “It saved a life, if not multiple.”

About AWR Hawkins:
If you have questions or comments, email him at [email protected] You can find him on Facebook at www.facebook.com/awr.hawkins.

Next American Republic On a Fast Track to National Ruin