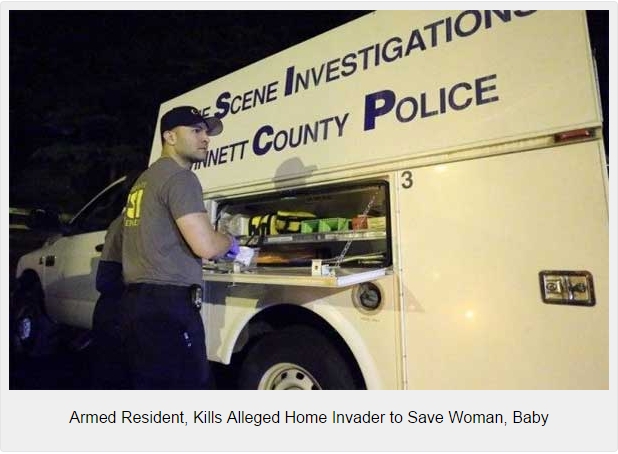 On May 11, a man in Gwinnett County, Georgia, shot and killed an alleged home invader and injured another to protect a mother and baby.

The incident occurred around “just before midnight.”

According to AJC.com, the man told police he retrieved his gun after seeing the suspects “walking across his back patio.” Shortly thereafter, he heard a knock at his front door and, when he answered it, the suspects “asked him to step outside”

The man told them he did not want to step outside. Gwinnett police Cpl. Michele Pihera recounted what happened next:


When the victim said that he was not interested in stepping outside, that’s when the suspects forced their way inside the home. One of them was wearing a mask and one was armed with a bat. Inside the home was the victim’s family, a female and a small infant.

Once the men were inside, the man fired “at least two rounds,” striking one of the alleged invaders in the chest, killing him. Another suspect–32-year-old John Michael Bush–was also shot, but his wounds were not life-threatening.

Police arrested Bush when he showed up at a hospital for treatment. A third suspect was also apprehended at the hospital. Police believe he may have driven Bush for treatment.

The man claimed he saw a fourth suspect “limping” away from the scene. Police searched but did not find him.