A church sign in Jacksonville, Florida, is getting a lot of attention and creating controversy throughout the community as well as online. Whether your walking or driving down the street, there’s no way you can miss it.

The sign reads: “homosexuals must repent or go to hell.”

According to KRMG, the marquee sits in front of the First Conservative Baptist Church and now a petition with more than 100 names requesting the church take the sign down is on Change.org. Most of the people who have signed the petition disagree with the message on the sign, saying that it is judgmental.

Cate Dobbins, who lives two miles from the church, started the petition after becoming offended by the sign after driving by it a few times a week, according to a letter posted on the LGBT/JAX Community Directory on Facebook.

“I am not here to debate the truth or falsehood of the statement on your sign. I am here … to tell you that I and many others believe your sign is un-Christian, and if you truly wish to live the letter of your doctrinal statement you will take it down immediately,” she wrote. 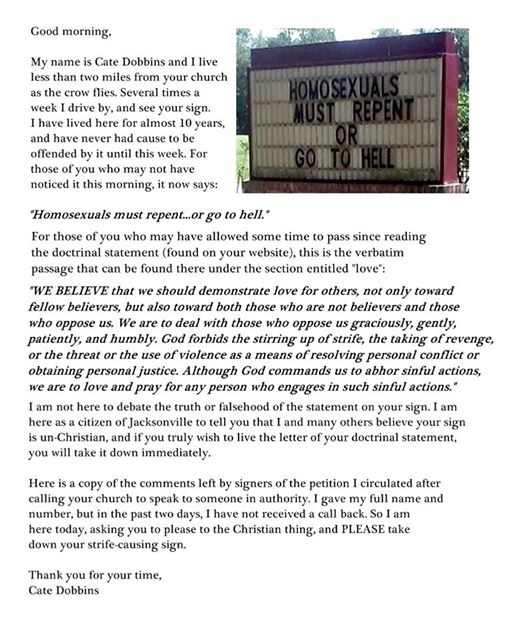 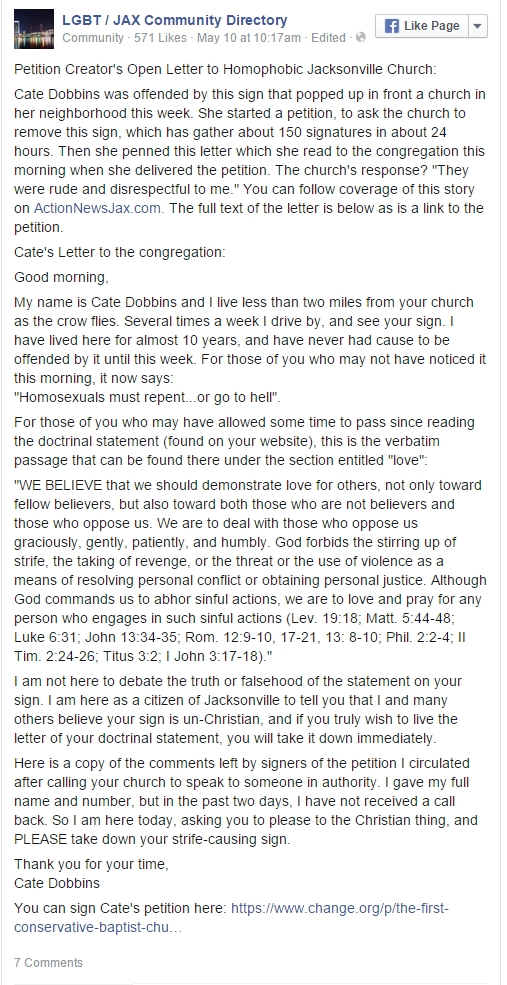 Evaristo Ghines, who lives across the street from the church, said he believes in freedom of speech, but the church message is a little strong.

“I was a little shocked, that they will deliver a message in that manner,” he said. “I’m a Christian and I believe that God loves everybody and if you feel that homosexuals should adhere to something that’s not the way to do it. If the church wants to deliver a message and their goal is to save homosexuals then you would do it with kindness rather than blurt out a message telling them they’re going straight to hell.”

Action News went to the church office Saturday to talk to the pastor.

He told Action News that he didn’t want to talk Saturday and to come back Monday. Then he told the television crew to get off the property.