“This is my business, those are my feelings,” Fyfe told KCTV5 News on Monday.

Those “feelings” include: “Lawrence Sucks.” “Restore Freedom. Even niggers want to be free.” And, “Goodbye Obamaville.” 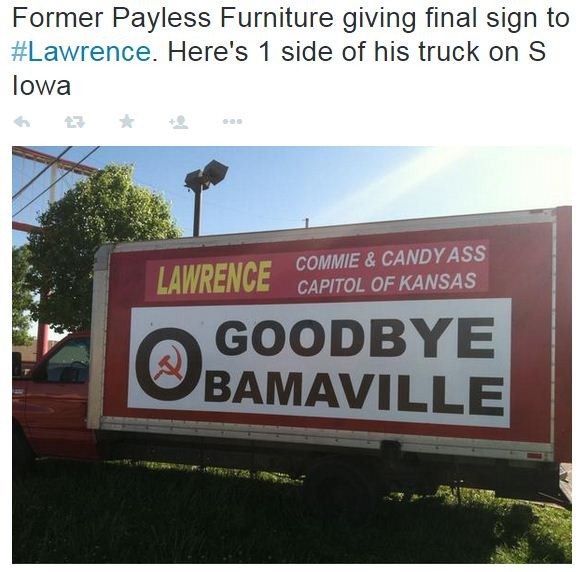 After 39 years, Fyfe is closing up his business, and going out with a bang. He has displayed the signs on a large box truck in front of his building, which is located near 28th and Iowa streets.


“This is a liberal town,” he told KCTV5’s Heather Staggers, “And I just had to get out of it.”

He calls his town “a refuge for welfare lowlifes from KCK and Topeka.” He refers to single mothers, gays and undocumented workers.

“I call it free speech,” he explained. “I call it telling it like it is when people actually before political correctness and you had people who are draining society.”

The signs, which also call the president “a liar, and lawbreaker,” have attracted a lot of attention at his store. Some people agree with his opinions, while others say they are offensive.

“I like this sign,” said David Holroyd, “because it is true about Lawrence. They stripped our freedoms away.”

But Garnell Moore Williams does not agree.

“I do see we have rights of freedom of speech,” she says, “but at the same time, I don’t believe it’s completely right to be so disrespectful in certain areas.”

For his part, Fyfe says it is time for him to leave a city he no longer likes.

“I just can’t stomach it,” he says. “I’m going to go someplace in the South or Texas, where people actually are patriotic and care about America and not just themselves.”

Lawrence officials say they’re received some calls about the sign, and that they are investigating whether the signs are breaking the law.

While Fyfe has free-speech rights, the city is looking to determine whether the signs are the right size and whether the business owner has the right permits.

Fyfe said America needs to return to its God-based roots.

“God helps those who help themselves,” he declared.


Previous The Return of Obama’s Hoax-Spreading Bitter Half