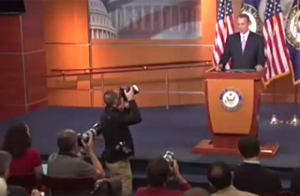 Democrats seized the opportunity for political points in the aftermath of this week’s deadly Amtrak crash, pointing out that that hours after the crash, the House GOP voted to cut Amtrak’s funding by a fifth. Is it possible, they asked, that the GOP is partially responsible for the train crash?

“They started this yesterday — ‘it’s all about funding, all about funding!’ Obviously, it’s not about funding,” he continued, saying that the train itself was not supposed to be going 100mph at that curve, which is a fact that could not be changed with money. “The adequate funds were there. No money’s been cut from rail safety.”

“It’s hard for me to imagine that people take the bait on some of the nonsense that gets spewed around here,” he fumed, and flew into the dark corridors, away from a bunch of nervously giggling pool reporters.

Watch below via C-SPAN3: