Rep. Bonnie Watson Coleman (D-N.J.) has introduced the Stop Online Ammunition Sales Act of 2015. The bill unveiled Tuesday would require federally licensed ammunitions dealers to confirm the identity of individuals who arrange to purchase ammunition over the Internet by verifying a photo ID in-person. 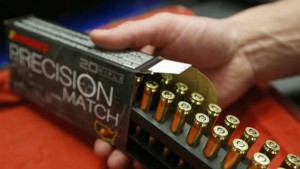 The bill would also require ammunition vendors to report any sales of more than 1,000 rounds within five consecutive days to the U.S. attorney general if the person purchasing ammunition is not a licensed dealer.

“Far too many times, we have seen the shocking images of unspeakable gun violence that could have been prevented,” Rep. Frank Pallone Jr. (D-N.J.), one of the bill’s original cosponsors, said in a joint statement. “Our bill to limit the online sale of ammunition is a long-overdue common sense reform that I am hopeful will spark Congress to put aside party difference and come together to help prevent such senseless tragedies.”

Cochran said buyers would still be able to complete an Internet sale, but would need to present a photo I.D. in-person at an authorized dealer before the shipment can be made.

The bill aims, she said, to help prevent malicious attacks like the July 2012 shooting in the Aurora, Colo. movie theater that left 12 dead and 70 wounded.  If someone is trying to stock pile ammunition for a malicious reason, Cochran said the bill would give law enforcement a better chance at preventing an attack.

Rep. Donald Payne Jr. (D-N.J.) has also signed on as sponsor of the bill.

“This common-sense reform would save lives by depriving violent criminals of a means of anonymously amassing ammunition without proper scrutiny,” he said.