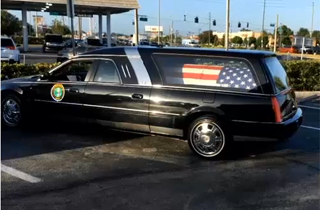 Two Florida men are currently out of a job after a man discovered that, while transporting the body of a deceased veteran to his funeral, they’d made a pit stop at Dunkin’ Donuts.

Carpenter also managed to scold the two men for leaving the remains of Ltc. Jesse Coleman, a veteran of both Korea and Vietnam, unattended. As he recounted to WFLA:

He took video, snapped a photo and then confronted the funeral home workers when they returned, coffee and a bag of doughnuts in hand.

Carpenter, whose own father served this country in the military, described his confrontation with the driver.

“I’m like, ‘Is this really a body in here?’ and he says, ‘Yes,’ and I said, ‘So you have a dead soldier in the back of your hearse and you’re stopping to get coffee?’ And he didn’t say anything.”

The funny thing is, if this were Boston, we’re 70% sure the deceased vet wouldn’t mind one last Dunkin Donut’s run before going to his eternal rest.

Watch below, via WFLA: