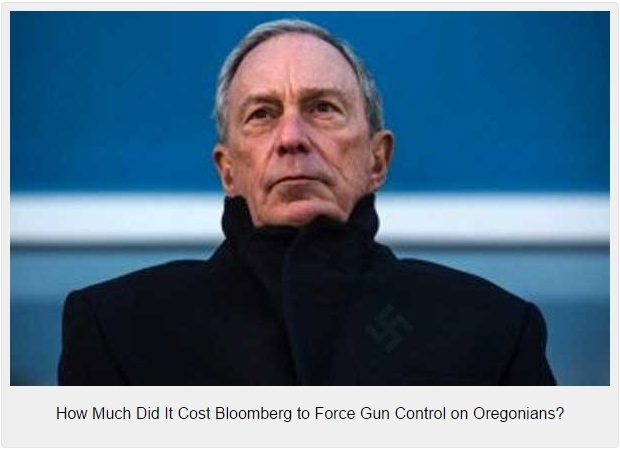 When the Oregon Senate passed expanded background checks on April 14 2015, it marked a change from 2013 and 2014, when the same type of legislation was taken up but defeated without even making it to the floor for a vote.

What was the difference in 2015? One huge differences was the influx of Michael Bloomberg’s money into the state, which showed itself not only in the establishment of an apparatus to help gun control candidates get elected but also in gifts to gun control senator Chuck Riley (D-Hillsboro).

Riley received considerable financial backing from Bloomberg-funded Everytown for Gun Safety in order to unseat gun control opponent former senator Bruce Starr (R-Hillsboro). It was Starr who had defeated background checks when they came up in 2013 and 2014.

According to OregonLive, Bloomberg-funded Everytown began setting up “robust” field staffs in April 2014 to help gun control candidates navigate the last months of the election cycle, leading up to November. Bloomberg did this same thing in “10 other states,” but chiefly realized gains from this tactic in Oregon and Washington.


In addition to these staffs, Bloomberg-funded Everytown gave money to senator Chuck Riley, who was able to unseat senator Starr and vote “yes” for expanded background checks on April 14 2015.

September 2014 estimates reported Riley received around $22,000 from Bloomberg-funded Everytown, but when the Oregon Secretary of State released official campaign donation figures, they showed that Riley actually received $75,000 from the Bloomberg-funded group.

While it is unclear how much total money Bloomberg spent between field staffs and Everytown gifts to Riley, it is certain he had pledged up to $50 million nationwide to secure more gun control. And in Oregon this approach gave Bloomberg a senator he, Gabby Giffords, and Mark Kelly can trust [read own] to vote “yes” every time the call for more gun control on law-abiding citizens comes up.

Next Obamacare Exchanges on Life Support