FOX 35 Orlando (WOFL) — A Florida woman is accused of driving under the influence of alcohol with children in the car.

On Tuesday, a deputy with the Volusia County Sheriff’s Office stopped the woman along State Road 44 in New Smyrna Beach, when he said he saw a vehicle with expired tags and a child bouncing around and not buckled into a seat.

According to a report, 33-year-old Cateria Thomas appeared to be drunk. The deputy noted that she had glassy eyes, smelled of alcohol, and was breast feeding a 2-month-old child when she was told to step out of the car. The deputy said she failed a sobriety test and refused a breathalyzer.

Thomas told the deputy that she hadn’t been drinking, but that she had just eaten four hamburgers with whiskey on them, the report states. 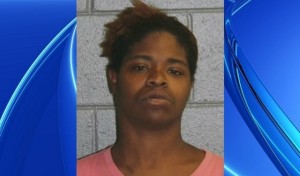 Thomas was arrested on charges of DUI, child acts that could result in harm, and driving without a valid license.

Four children were in the car, ages 2 months, 1, 3 and 4 years old. They were taken into custody by the Department of Children and Families, but will be staying with a family member.

As of Wednesday afternoon, Thomas was still booked in the Volusia County Jail.