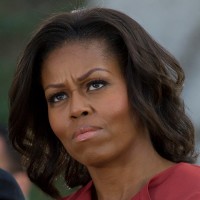 Michelle Obama, in need of a “nigga” bump, lamented how (sniff, sniff) difficult it has been for her as the first black first lady. After all, she can always count on those who Flesch-Kincaid Grade-Level Comprehension Tests would rate as having a third-grade reading and comprehension level. (A “nigga” bump is explained as gaining black support by fomenting black acrimony by using racially charged metaphors that portray a black person as victim of white persecution.)

Michelle Obama shamelessly told students at Tuskegee University in Alabama last weekend of the emotional toll and challenges of being the first black first lady. She actually gave a teary perspective of how bad her life is and how unfair the media is to her, going so far as to say the remarks from political pundits have kept her up at night.

If that is the case, Lord I pray that what I say about her not only keeps her awake but it causes her bedwetting nightmares. The woman is a disgraceful race monger who was stirring the caldron of racial disharmony using subliminal suggestion that white people are attacking her so savagely that it keeps her awake at night. She may have been awake at night but it was from nothing that we said about her. Suffice it too say, whatever was said about her wasn’t sufficient to have her not behave like something we’d throw peanuts at if we were in a zoo. What next? Will she complain that as the first black first lady menopause is more difficult for her than others?

If the black students at Tuskegee had any dignity or understood anything at all about the Booker T. Washington, who founded their school, they would have stopped the Obama woman in mid lie, er, sentence, and told her that she was seated in the school founded by one of America’s most honored and revered statesman, and accordingly they were interested in hearing what she had to say about being properly prepared for success in life in a way that is consistent with what Booker T. Washington stood for.

The Obama woman left no piles of manure un-stepped in as she waddled through the chicken yard of fomenting racial acrimony. She was unoriginal as rain in the springtime in her feigned lament but if old lies work why tell new ones?

She said: “And over the years, folks have used plenty of interesting words to describe me. One said I exhibited a little bit of uppity-ism. Another noted that I was one of my husband’s cronies of color. Cable news once charmingly referred to me as Obama’s baby mamma.”

You might as well have been throwing soup bones and collard greens the way her lies were lapped up by those in attendance. I have my finger on the pulse of conservatism like few others and I can tell you that no one I know has referred to her as “uppity.” Countless numbers however have referenced her as common, boorish, uncouth, tacky, and a disgrace to the decorative position she holds. 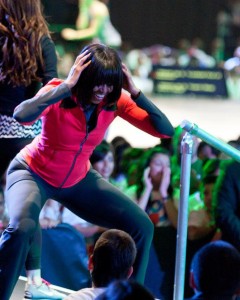 To engage in such racial code speak as “uppity-ism” which immediately brings to mind “uppity-nigger” is boorish and morally opprobrious but obviously not out of character for her. Her speech to the students transpicuously displayed the lengths she will go to create a divide where none exists.

She claimed that people questioned if she was: “too loud, or too angry,” etc. I questioned if she would be even remotely ladylike enough. Look at some of the photos of her glaring at the French President’s wife. Look at the photos of her glaring menacingly at Obama during certain functions. I’d say those photos answer the question of her being angry.

She has used the decorative position she enjoys as her personal taxpayer-provided American Express Black Card, arguably the most exclusive credit card in the world. She has used her position to spend, glut, gobble, and drink like no other woman in her position before her and doubtful after her.

Every first lady in history has had enough common sense to know that you do not hug the Queen of England. She hugged the Queen as she would one of her homies at a Saturday night block party in the ghetto.

She conveniently omitted telling the Tuskegee students that taxpayers have spent $1.4 billion on everything from staffing, housing, flying, and entertaining the Obama family in 2011. She omitted that as I wrote (Michelle Obama: First Lady of Spending Taxpayer Money; Mychal-Massie.com): She has twenty-six attendants (i.e., staff) at an annual cost to taxpayers of $1,750,000. That includes a hair dresser and the same make-up artist Oprah uses who charges $15,000 per day for his services. Actually I’m surprised she didn’t try to put her daughters on her payroll insofar as she lied and named them as staff when she took her taxpayer-funded African safari where she ate her way through the jungle.

Then there was the Daily Mail story that revealed just how hard it is for Michelle in her life as a public servant in the role of First Lady, “Michelle Obama Accused Of Spending $10m In Public Money On Vacations.” This included “expensive massages, top shelf vodka, and five-star hotels.” The article, which was written in August 2011, reported that she had “spent $10 million of U.S. taxpayers’ money on vacations alone in the past year. Branding her ‘disgusting’ and ‘a vacation junkie’, they say the [then] 47-year-old mother-of-two has been indulging in five-star hotels, where she splashes out on expensive massages and alcohol. The ‘top source’ told the National Enquirer: ‘It’s disgusting. Michelle is taking advantage of her privileged position while the most hardworking Americans can barely afford a week or two off work.” (Daily Mail)

The DailyMail article quoting a source specifically noted, “Michelle also enjoys drinking expensive booze during her trips. She favours martinis with top-shelf vodka and has a taste for rich sparkling wines. … The vacations are totally Michelle’s idea. She’s like a junkie. She can’t schedule enough getaways, and she lives one to the next — all the while sticking it to hardworking Americans.” There were the separate presidential jets that had them arrive 4 hours apart on the same day for their lavish Martha’s Vineyard vacation at a substantial cost to taxpayers. A vacation where she ate, drank, and spent, as Obama was reported to have read books “about porn kings and gangsters…as [the Libyan crisis erupted].” (Daily Mail)

Recently I made a guest appearance in the Ukraine on a television news show that airs in Russia. The people of Russia were very interested in the behavior and spending of Mistress Obama. She can deceive black students predisposed to believe any suggestion of whites being racist, but the world is watching and they are not so easily deceived.

She has behaved in ways that are antithetical to even a cursory understanding of propriety consistent with the position of first lady. Her choice of attire worn at the Kids’ Choice Awards was in poor taste and beyond tacky. What first lady has ever wallowed and flopped on the floor of a late night television show? What first lady in history has ever comported herself as this person has? The fact that her behavior is tolerated reminds us just how low the expectations and standards for those in office has become specifically if they are black.

Remember the photo of her deboarding one of the taxpayer aircraft used for her jetsetter life? She was dressed in attire perfect for backyard garden work but not for the position she holds. Can we ever forget the deep panty-line crevices in the ill-fitting slacks she was photographed wearing as the so-called first family was en route to a venue?

Blacks are blinded by skin color but every black professional who applauds the Obamas secretly knows the Obama woman is an embarrassment. Can you imagine Mrs. Colin Powell shaking her behind and doing pushups for the amusement of Ellen DeGeneres? How many black preachers who support the Obamas would want their wife shaking her behind in skin-tight pants in the faces of grade school boys?

It is the American people who are kept awake at night by the charades in the White House. In her mind she has hit the mother lode. And yet instead of acknowledging same she continues to spread the lie of how hard it is for her because she is black.