Ever want to join the Mile High Club…. Here is your chance for a small fee….. Scroll down for photos.

Legend has it that almost as soon as American aviator Lawrence Burst Sperry invented autopilot control in 1914, he started using this major development in flight safety to get laid in the air. A few years later, Sperry had a cockpit romp so vigorous that an errant heel knocked out the automation system. The plane crashed and a couple of duck hunters found Sperry and a married woman naked and scrambling for plausible excuses in a Long Island pond. Basically, as soon as humans learned to fly, they wanted to screw in the sky.

Celebrities from Richard Branson to Johnny Depp have fessed up to partaking in high-altitude hanky-panky. But while there are technically no regulations against two people sneaking off and using an airplane lavatory together, the inherent discomfort and judging looks of knowing passengers mean that most of us will never join the mile-high club.

But if you want to have sex above the clouds, all hope is not lost. Over the years, a number of small charter flight services have opened up offering private “mile-high club flights” around the country. Running anywhere from $300 to $1,000 per hour, and usually composed of a pilot with a Piper or a Cessna, a noise-canceling headset, and a sheet to partition the cockpit from the passenger cabin for basic privacy, these services offer seatless, well-cushioned fuselages like LoveCloud, a Cessna 421 Golden Eagleoperating out of Las Vegas for the last year with mood lighting systems and a heart-shaped bed. Yet few of these fly-by-night operations survive more than a few years.

The one outfit with any real longevity is Cincinnati’s FlamingoAir. Originally a mixed mile-high and charter flight service opened by pilot David MacDonald in 1991, FlamingoAir has slowly shifted to offering “flights of fancy” almost exclusively. Their flights, offered four to five times a week and up to eight times a day in the lead-up to Valentine’s Day, have become a reference point for mile-high club aspirants and other airlines looking to get into the business.

Eager to learn more about what a “flight of fancy” entails and how to make sure one’s mile-high experience is up to snuff, VICE got in touch with MacDonald to talk about overzealous couples, customer feedback on turbulence, and conducting quality control tests of his own product.

VICE: How did you end up running a “romantic flight” service?
David MacDonald:
It started as a dare. We were all “hanger-flying,” which is basically sitting around bullshitting, and the topic of the mile-high club comes up. I said, “You know, I bet I could sell that.” [My friends] said: “Man, not in Cincinnati. Way too conservative. You’ll never pull it off.” Well, that was like throwing down the gauntlet. That was 1991 and I’m still going strong. I mean the business is so good, we don’t even do charter anymore.

We do all kinds of airplane rides. We’ve probably given more kids their first airplane rides than you can shake a stick at. But our biggest seller is our “flights of fancy.” We do not bill it as the mile-high club. It’s billed as romantic airplane rides. You get one hour. You get a private, curtained-off aircraft. We take out a whole row of seats and it’s filled with big, fluffy cushions. You get champagne and chocolates and souvenirs and a very discreet pilot. And frankly, what goes on behind the curtains is no concern of mine!

We actually had a request from some people in Iceland who they wanted to know if we had an airplane which would accommodate ten couples.

You’re established now, but did you have trouble being in Cincinnati at first?

No, I didn’t! Everybody thinks that Cincinnati’s the conservative capital of the world. That’s only when the lights are on and the doors are open. Close the door, man, and have at it. 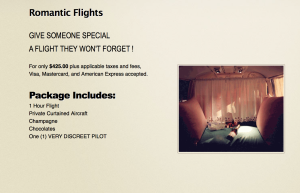 I’m sure you’re a dignified pro by now, but what was your first flight like?

The first flight was a blind date. It was set up by one of the local radio stations. I get to the airport, and there’re two people in a pick-up truck. And man, they are going at it hot and heavy. I didn’t think much of it, but then it turns out that this is [the couple I’m flying]. These two had never laid eyes on each other until they met at the airport. So that kind of set the stage.

Remember, this is a fun thing, so we try to keep [it] light and fun and everybody having a good time. I get ’em in the airplane and I say, “Now, we’ve gotta get your seatbelts on for us to move the airplane—you can take ’em off once we’re airborne. I’ll holler back at ya and let ya know when, and I’ll just close this curtain.” And [the woman] says, “Well, you can leave it open if you want.” And everybody had a good laugh.

Then, as I’m going down the taxiway, she says, “Does this thing have an autopilot?” I say, “Yeah…” She says, “Well, I’ll do you too!” I’m just going, “Oh jeeze… I don’t need this!” But we laughed everything off and it was in good humor.

So I sit down and I’m going through the final checks on the airplane. Then I turn around to say, “OK guys, I’m gonna pull this curtain.” But it was too late. They didn’t even make it down the runway. They were going at it. I just closed the curtain and off we went.

That’s not how every flight goes down, is it?

Oh, absolutely not. It is kind of amazing—most of the folks who show up are middle-aged, straight-laced. I mean, you’d think they’d just stepped out of a Republicans Club meeting. Most of these folks are fairly well-to-do. They’ve got the disposable income. [The flight] is not that expensive—it’s $425. But it’s all part of how it’s marketed.

Do they give you feedback on their experience in the back?
Sometimes I feel like a psychologist, a priest, and a hairdresser all rolled up into one. Sometimes they tell me everything! More than I want to know. I get a lot of feedback. Amazingly, I don’t think I’ve ever had a complaint. I’m fortunate with that. I mean, who’s going to complain after you make out at 7,000 feet?

I’d have thought that people might have trouble with turbulence and bumpy rides.
We’ve had a few incidents like that. And I said, “Hey, I’m sorry for the rough ride—can’t control the weather.” And they say, “It’s OK. We just assumed the position and let Mother Nature do the rest.”

Often the ladies will show up in a full-length fur coat and they’ve got nothing on under it.

So there’ve never been accidents or incidents caused by people getting carried away and, say, not buckling up or paying attention on descent?
I have never, ever had an incident of any kind like that. Folks are pretty good. I give them a 10-minute warning. I don’t want to say we’re tough, but we’re damn firm on the rules.

Do you ever get any requests for extra services beyond just taking people to altitude?
Yes, I have. We had somebody bring their dog. We’ve had requests for threesomes. We actually had a request from some people in Iceland. Now, these folks have too much time on their hands in Iceland and they wanted to know if we had an airplane which would accommodate ten couples and are there any restrictions, save damage to the airplane or injury to the pilot. Now think about that for a minute! We actually do have an airplane that would accommodate that, but we didn’t want to fool with it. We had a pretty interesting S&M couple one time and they wanted some personal involvement, but I didn’t want to do that. I’m pretty straight-laced—I’m only concerned with flying the airplane. That’s all I know.