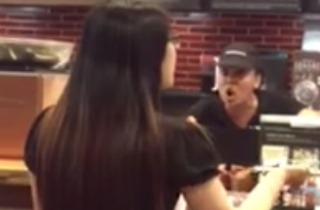 A Starbucks shift supervisor ended up losing her job after being captured on video going on an angry rant against a customer. Ruby Chen posted two videos online and explained that she was accused of stealing a cookie straw by this very angry manager.

According to The New York Daily News, Chen didn’t hear someone asking her name to write on the cup as she was briefly looking down at her phone. From there, Chen said, the woman behind the counter started getting really snippy with her.

The Starbucks manager, identified as Melissa, shouted things like “Do you not get it?!”, “Call the cops!”, and “Get out! You’re not gonna be served here! Bye!”

Chen complained online and Starbucks informed her that the worker was let go as a result.

Watch both videos below: