Police in Waco, Texas have reported multiple fatalities and injuries in a shooting between rival biker gangs a restaurant Sunday afternoon.

“Officers were on scene when shooting started,” the Waco Police Department posted on Facebook. “No officers have been injured.”

The severity of the injuries was not immediately clear and it’s unknown if bystanders at Twin Peaks restaurant were among the injured. 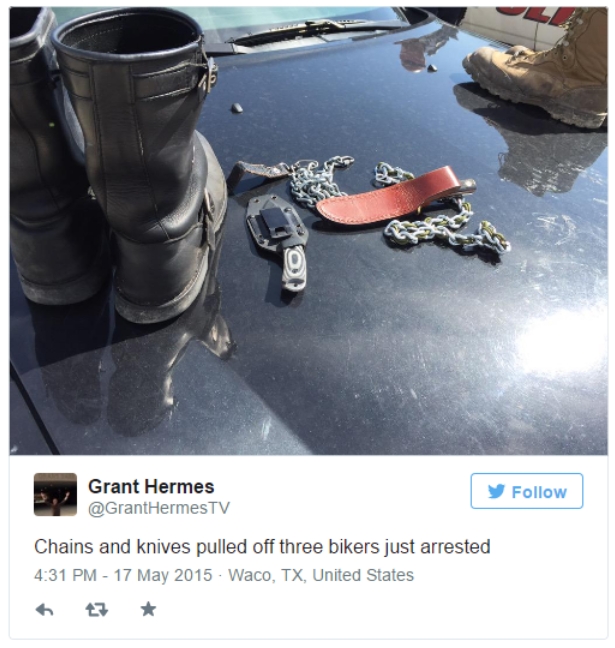 Swanton said authorities are concerned that gang members are moving to other parts of the city to continue the confrontation elsewhere.

McLennan County District Attorney Abel Reyna told KWTX earlier this month that law enforcement was aware of simmering conflicts between gangs that gathered at the restaurant.

Police are asking everyone to avoid the area around #TwinPeaks after a #shooting. #Waco pic.twitter.com/Qm1jcu1uey

A witness who was having lunch across the parking lot at Don Carlos Mexican Resaturant said he and his family had just finished eating and walked into the parking lot when they heard several gunshots and saw wounded being taken from the fight scene.

“We crouched down in front of our pick-up truck because that was the only cover we had,” the man, who asked not to be identified, said.

TWIN PEAKS SHOOTING: Avoid the area around #TwinPeaks in #Waco as police investigate a #shooting. pic.twitter.com/spW49ajP7M

Next Who Stands Up for Free Speech?