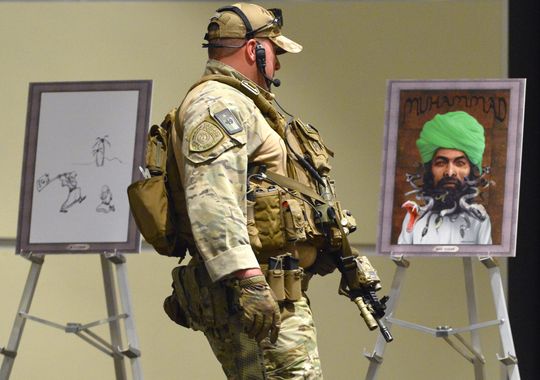 A police officer saved hundreds of lives in Garland, Texas after two Muslim terrorists attacked a free speech rally.  Ammoland promotes public debate.  The United States of America is one of the few countries where citizens like us may still freely share our views.  The free speech event held in Garland, Texas last week was a private event open to the public.  There we saw a concrete example of armed defense protecting the right of free expression and free association.  Thank you, Officer!  Compare this officer’s courage to the frightened criticism we’ve heard from some politicians and journalists after the terrorist attack.  Are the politicians and talking heads really that afraid of free speech?

Think about what we’ve heard after the attack and compare it to other examples of public expression.  We were told that the riots in Ferguson and Baltimore were acceptable political expression.  In contrast, we have been told we can’t allow concealed carry on campus because free speech on campus is too impassioned. Again we are told, by some of the same academics and media talking heads, that we can’t draw a cartoon of Muhammad because that would lead to an impassioned response.  We are told that speech can not be free if it offends a protected minority.

Wake up and smell the hypocrisy.  Some minorities are clearly more equal than others.

These critics are wrong. Free speech does not depend on approved content.  Some mainstream journalists said they were comfortable with speech restrictions.  That is shameful.  Those journalists sacrificed our rights in order to protect their comfortable positions.  The talking heads defended their comfort and sacrificed their integrity.  They are not alone.  We’ve seen a parade of hypocrisy.

Some rights are more equal than others. When it comes to restricting our right of self-defense, we’re told that any infringement is justified if it could possibly save one life. That is the excuse politicians used when they told California and New Jersey civilians they must use “smart guns”.   Of course those same restrictions wouldn’t apply when the police are protecting politicians and judges.

Some lives are more equal than others.


Ok.  Let’s stop on attack and save one life.. on campus.  There the rules change again. Can’t an armed civilian prevent one assault, prevent one robbery, or prevent one rape on school property?  No, the standards change.. and now we need to justify concealed carry on campus with a preponderance of evidence and present a cost benefits analysis.  The media has not come out and said a college co-ed deserves to be raped because she went out in public without wearing a burqa.  Not yet.  Yet the media said a violent attack in Garland was justified because some Muslims somewhere were offended by a cartoon.  Silly me, but I thought we all had the same rights and they applied everywhere.

The free speech protest in Texas was organized by Pamela Geller. She lives in New York City. I wonder if anti-gun mayor Bill De Blasio now thinks Miss Geller faces an imminent and continuing threat so she can have one of the rare concealed carry permits issued in New York City.. or are some lives more important than others.

We have a name for it when there are different standards for similar events and circumstances.

We are seeing bigotry against Christians and Jews.  We see politicians and their supporters receive special standards for free speech. We see anti-rights bigotry that advocates unilateral civilian disarmament.. while politicians and celebrities have armed body guards.

Oddly enough, we’re told that an armed civilian is both incredibly dangerous.. and that a single person armed with a pistol is impotent against a terrorist or an armed criminal.  We tested that hypothesis in Texas last week.

Two terrorists wore body armor and carried semi-automatic rifles.  There were no innocent victims in the eyes of the terrorists.  The several hundred artists, visitors, speakers and journalists at the free speech rally were all considered guilty.  Every man, woman and child was a terrorist target.  Against that, a 60 year old traffic cop carried his side arm.  The officer walked toward the gunfire and drew his pistol.

We found that an armed individual is both safe and effective in protecting others.  If the officer had not been there, then it would have been up to us to protect ourselves. In all fairness, I must correct the initial news reports.  The officer did not act alone.  Although the traffic cop scored the first hits on the terrorists, he soon had support from SWAT officers on the scene.

It is up to us.  We must speak up and defend all our rights.  We must do so.. because journalists and politicians won’t.  A lone officer did. 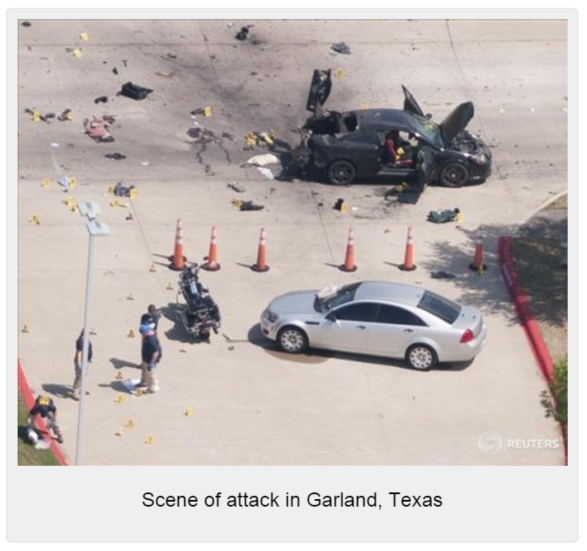 ~_~_
About Rob Morse: By day, Rob Morse works as a mild mannered engineer for a Southern California defense contractor. By night he writes about gun rights at Ammoland, at Clash Daily and on his SlowFacts blog.   He is an NRA pistol instructor and combat handgun competitor.