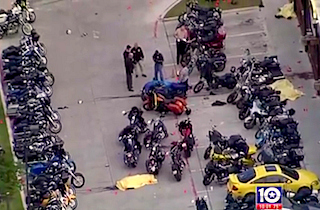 “In 34 years of law enforcement, this is the worst crime scene, the most violent crime scene that I’ve ever been involved in,” said police Sgt. W. Patrick Swanton. “Dead people are still there. There’s blood everywhere. We will probably approach the number of 100 weapons that we’ve recovered.”

Police joined in the gunfire. Astoundingly, no officers or bystanders were injured.

“Within 25 feet there were families eating dinner,” Swanton said. “I was amazed that we didn’t have innocent civilians killed or injured.”

The fight reportedly started over a parking spot, but followed weeks of mounting tensions between upwards of five biker gangs who intersect at the restaurant, which the Texas Alcohol Commission is considering closing until things cool off. Officials said the restaurant had been “negligent” in not working with police before the shootout.

Police in central Texas have been on high alert ever since, following rumors that more bikers were on their way to the Twin Peaks restaurant, the site of the shootout.

Watch a local news report below, via KWTX: