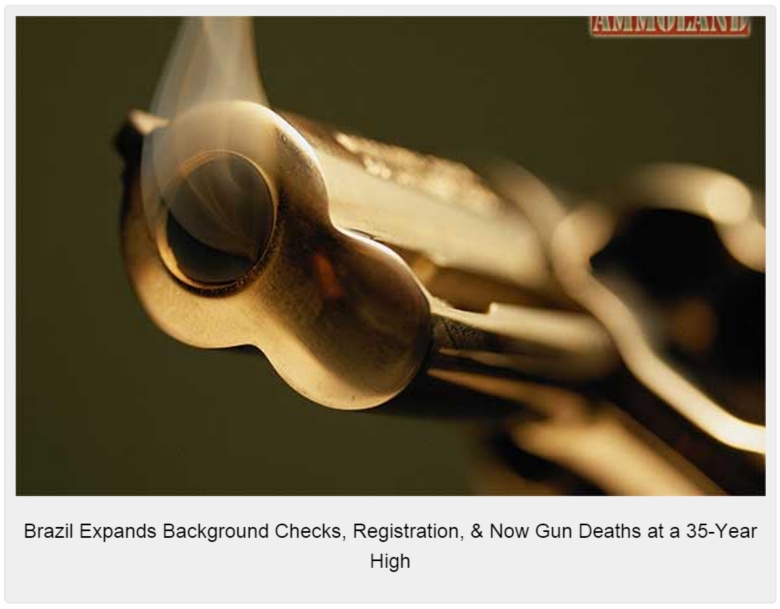 Over the last 15 years, Brazil has instituted more and more gun control, including gun registration and criminal and mental background checks for gun ownership.

Today they have “restrictive” gun control, and one more thing—a 35-year high for gun deaths in the country.

According to The University of Sydney, Brazil instituted expanded background checks in 2003. These include not only mental and criminal background checks, but checks into employment records as well. Brazilians who pass the background checks then get a gun owner’s license for which they have to retest every three years.

Brazilians with a gun owner’s license must then register every gun in a database. A 1999 law—readdressed in 2003—says “that a record of the acquisition, possession and transfer of each privately held firearm be retained in an official register.”

Fast forward to 2012 and with registration, expanded background checks, and government-mandated gun-free zones the law of the land, Brazil’s rate of firearm-related deaths hit a 35-year high.

The Telegraph published the findings of a United Nation’s Educational, Scientific and Cultural Organisation (Unesco) study showing that “more than 115 people were shot dead” in Brazil every day in 2012.

The total number of firearm-related deaths for that year was “42,000.”

That works out to an overall firearm-related death rate of roughly 22-per-100,000 Brazilians, and a murder rate of “20.7-per-100,000.” The study shows that the majority of those shot in this increase of gun violence were “young black men.”

Study author Julio Jacobo responded to the skyrocketing firearm-related death rate by suggesting that “a series of necessary reforms” still needs to be added, and “new discussions around gun control and its relative effectiveness are emerging on the horizon.”


Previous [VIDEO] Forget Raining Cats and Dogs, It Is Raining Spiders In Australia!

Next The Boston Bombers Mother Threatens The U.S. Now That Her Son Has Been Sentenced