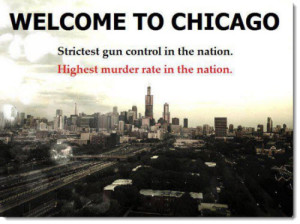 We’ve all heard the phrase ‘you can’t fix stupid’ and that couldn’t be more apparent with Rahm Emmanuel’s draconian gun laws. Over the weekend of May 15th through the 17th, a total of 42 people were shot and that included an 81-year-old grandmother who was at a memorial for her deceased daughter.

Call it a stroke of luck or a genuine miracle but out of all the people who were shot, there was only a single fatality when there’s normally multiple fatalities each weekend due to gun violence in the Windy City.

One of the first weekends with nice weather in months brought violence with it as the toll of wounded in Chicago climbed to over 40 people.

Among the 42 people wounded was an 81-year-old grandmother who was at a gathering to mourn the death of her daughter. Surprisingly, only one death figured in among the high number of shootings over this bloody weekend.

The long list of shootings began with a Friday that saw 11 shootings, most in the Englewood and Gresham Districts.

Friday also brought the serious wounding of the 81-year-old woman. Around 5 PM, Iola and Sylvester Burress were standing on a porch in their Auburn Gresham neighborhood when a white SUV drove by with someone inside firing from the sunroof. 81-year-old Iola was struck four times, once in the wrist, twice in the stomach, and in her arm. The elderly woman is listed in critical condition at Advocate Christ Medical Center in Oak Lawn.

How many lives must be destroyed before people realize that disarming law abiding citizens only empowers the criminals in society? If gun control worked, places like Chicago would the the safest cities in the world.


Previous THE AWKWARD MOMENT When Cops Shoot White Thugs, And No One Riots or Sets The Town On Fire

Next RINO Christie: ‘You Can’t Enjoy Your Civil Liberties If You’re in a Coffin’