We have chose to obfuscate the actual image due to the offensive nature and the ever evolving terms of service on Facebook. You never know what they will censor or flag.

“I understand it’s a very sensitive thing, but it wasn’t meant to be offensive toward anyone,” Maugens told the news station. She added that she apologizes for any hurt her action caused.

A bartender in Lakewood, Ohio, says she was just joking when she printed the word “fags” on a receipt she gave to friends who had stopped in for a drink, but a photo of the bill has gone viral, angering many people.

Alissa Maugens, a 23-year-old bartender at West End Tavern, says she was serving her friends on Sunday afternoon and jokingly replaced their names on the receipt with the derogatory term for homosexuals, reports ABC 5 (video interview shown below).

“Nothing was meant to be malicious about it,” Andrew Rollings, one of her friends who was served that day, said.


But when one of Rollings’ cousins captured a SnapChat of the receipt, it was posted by another friend to Facebook, where it rapidly spread and garnered many negative comments: 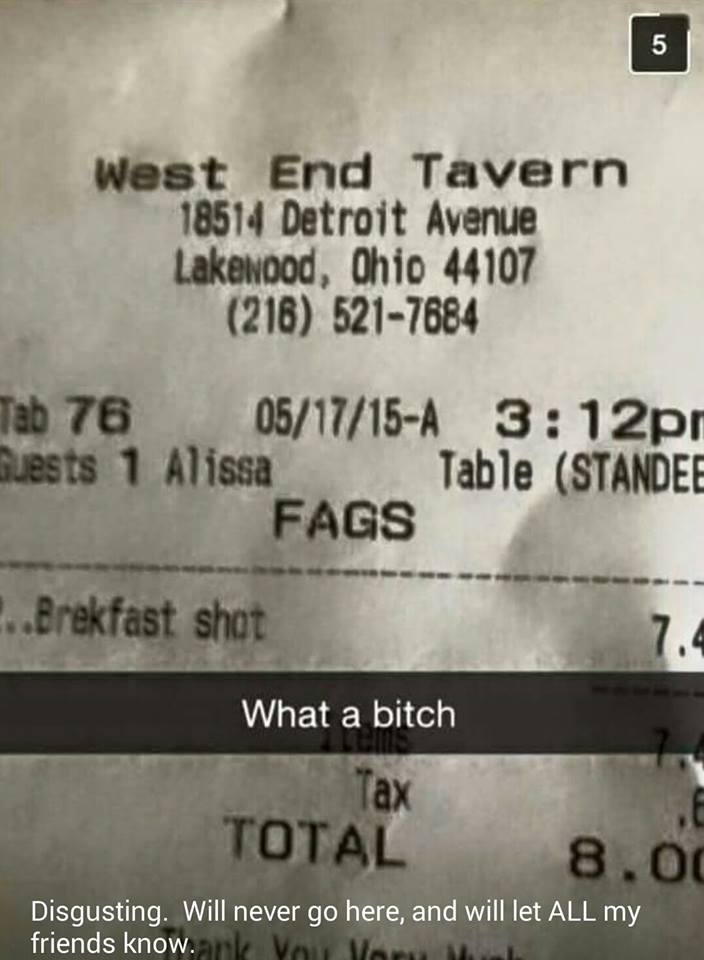 The receipt was so upsetting to some people that it was reposted on the bar’s Facebook page, where it received comments that included:

“Something like that shouldn’t be put out there,” Rollings said. “It’s something amongst friends. Just joking around.”

Maugens explained her side of the story in a TV interview with News 5:

Despite her argument that she didn’t mean harm, several people are saying she should have known better.

“That’s the way the world is these nowadays,” Craig Maurer, who saw the receipt, told ABC 5. “Anything you do is going to be out there. Celebrities probably know that more than anybody, but it should be a lesson to everyone.”


Previous [WATCH] 5 Year Old With a Heart of Gold, Brings a Homeless Man a Burger and a Blessing.

Next [VIDEO] TO HELL WITH THAT! Baby Spiders Are Falling From The Sky In Australia