When we look at the failures in the black community today, there seem to be lots of “activists” who want to tell us the problem lies in poor police relations — militant policing and presence. About two weeks ago I was on NPR’s Diane Rehm Show. The issue was about the black community and the other guests ranted on about everything other than what the real problem is — the decimation of the black family. Now, I must apologize because I’ve been sharing that the illegitimacy rate in the black community was 72 percent. I was wrong. It’s now 75 percent.

As Dr. Walter E. Williams writes for CNSnews.com, “Hustlers and people with little understanding want us to believe that today’s black problems are the continuing result of a legacy of slavery, poverty and racial discrimination. The fact is that most of the social pathology seen in poor black neighborhoods is entirely new in black history. Let’s look at some of it. Today the overwhelming majority of black children are raised in single female-headed families. As early as the 1880s, three-quarters of black families were two-parent. In 1925 New York City, 85 percent of black families were two-parent. One study of 19th-century slave families found that in up to three-fourths of the families, all the children had the same mother and father.” 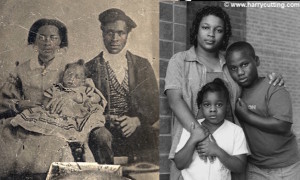 “Today’s black illegitimacy rate of nearly 75 percent is also entirely new. In 1940, black illegitimacy stood at 14 percent. It had risen to 25 percent by 1965, when Daniel Patrick Moynihan wrote “The Negro Family: The Case for National Action” and was widely condemned as a racist. By 1980, the black illegitimacy rate had more than doubled, to 56 percent, and it has been growing since. Both during slavery and as late as 1920, a teenage girl raising a child without a man present was rare among blacks.”

“Much of today’s pathology seen among many blacks is an outgrowth of the welfare state that has made self-destructive behavior less costly for the individual. Having children without the benefit of marriage is less burdensome if the mother receives housing subsidies, welfare payments and food stamps. Plus, the social stigma associated with unwed motherhood has vanished. Female-headed households, whether black or white, are a ticket for dependency and all of its associated problems. Ignored in all discussions is the fact that the poverty rate among black married couples has been in single digits since 1994.”

Those are facts and there is only one group that MUST be held responsible for this degradation and decimation of the black family — white liberal progressive socialists. It was fifty years ago when President Lyndon Johnson came up with the brilliant idea of the government giving a check to a woman having a child out of wedlock. But worse, the checks would continue to come as long as no man was to be found in the home.

So Johnson delivered a one-two punch: he told mainly young black girls having babies out of wedlock and not as part of a family was a financially beneficially course of action, and he told young black men they weren’t responsible or accountable for the most basic of tasks — being a father.

Now, here is the alternative that the white liberal progressives would present — just kill the child — again, promoting an utter disregard and disrespect for the sanctity of life in the black community.

But then again, Planned Parenthood’s founder, Margaret Sanger, had some very interesting thoughts on this topic, in her “Plan for Peace” from Birth Control Review (April 1932, pp. 107-108) “Article 1. The purpose of the American Baby Code shall be to provide for a better distribution of babies… and to protect society against the propagation and increase of the unfit. Article 4. No woman shall have the legal right to bear a child, and no man shall have the right to become a father, without a permit…Article 6. No permit for parenthood shall be valid for more than one birth.”

Or how about this from Woman, Morality and Birth Control: “We should hire three or four colored ministers, preferably with social-service backgrounds, and with engaging personalities. The most successful educational approach to the Negro is through a religious appeal. We don’t want the word to go out that we want to exterminate the Negro population, and the minister is the man who can straighten out that idea if it ever occurs to any of their more rebellious members.”

Doggone, I guess I’m one of those “more rebellious members.”

My point is that it seems the liberal progressive socialists have had a dedicated objective to destroy the once strong black family. It is a two-pronged assault — either through the expanded welfare nanny-state or by the outright murder of black babies. And sadly, Sanger was correct, white liberal progressives found colored ministers like Al Sharpton and Jesse Jackson who have placated the black community into advancing its own suicide.

And so the unemployment rate skyrockets and the education opportunities dwindle — thanks to the white liberal progressive teachers unions, NEA/AFT. It’s truly as Jason Riley asks in his book Please Stop Helping Us.

And so we have the first black first lady, Michele Obama, who instead of talking about resurrecting Booker T. Washington’s three point agenda — education, entrepreneurship, and self-reliance — has bought into the white liberal progressive socialist message of black victimhood and dependence, instead of black success, achievement, and victory. Instead of addressing these horrific statistics in which she and President Barack Obama exist, that only 25 percent of black children have a two-parent home, they choose to be the messengers of the white liberal progressives and help keep the black community on the 21st century economic plantation.

And tell me, who are the “sellouts?”


Previous [PHOTOS] ISIS Held a Massive Victory Parade, Where Was The US Airpower???

Next Teacher allegedly let students have sex in his storage closet....