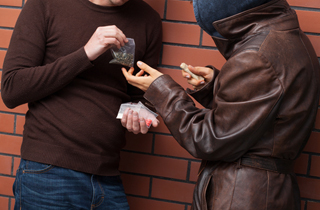 In the past few years, the New York City Police Department has discovered that younger drug dealers are more likely to be armed with guns and dangerous. As a result, the NYPD narcotics department issued a new rule to their narcotics division: stop arresting drug dealers over the age of 40.

As much as we’d like to joke that this is age discrimination, it’s actually the result of the NYPD’s desire to focus their resources on dealing with criminals in the 18-40 demographic. According to the New York Post, which got their hands on a memo from top officers, there’s been a 7% spike in shootings in this 2015 quarter compared to last year, and targeting younger drug dealers would help bring that spike down.

Okay, yeah, that makes sense. But the Post reports that NYPD top brass gets really unhappy when cops spend their valuable time arresting olds and displaying “a lack of commitment to this effort”:

A veteran source told The Post that a respected sergeant was threatened by the precinct’s commanding officer, Inspector Charles McEvoy, with a transfer after his team busted four older suspects.

“They were all over 40 years old. They were put through the system and went down to The Tombs. And [the sergeant] was pulled into a room. He was told if he does it again, he and his team will be launched out of Manhattan North. He’s doing what he’s supposed to do. That’s his job,” the source said.

“I’m blindsided by this. I don’t even know what to say. We’re letting criminals go. Crime is going to skyrocket.”

Assistant Chief Brian McCarthy, head of the Narcotics Division, reportedly told a group of commanding officers that the directive came from above him. When one of the officers pointed out that old people can be criminals too, he allegedly responded: “I’m glad you brought that up, but [the bosses] don’t give a s–t.”

So, congratulations, old drug dealers. Go make that sweet old person cheddar. Just don’t go into some young drug dealer’s territory, because statistically speaking, they have the guns and they’ll probably bust a cap in your elderly ass.

(Wait. Now we understand what the NYPD’s doing.)