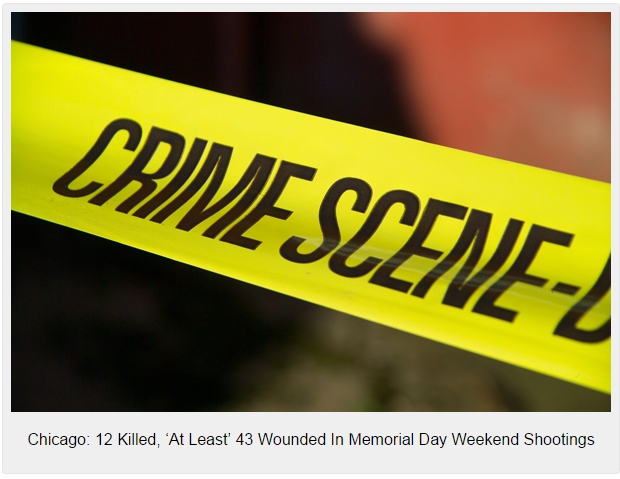 Over the Memorial Day Weekend in heavily gun controlled Chicago, 12 persons were killed and “at least” 43 were wounded in shootings across the city.

One of the wounded was a four-year-old named Jacele Johnson. She “was shot about 8 p.m. Friday in the West Englewood neighborhood” when a car pulled up next to the SUV in which she was sitting and opened fire.

According to CBS Chicago, the girl is in fair condition. A teenage cousin who was in the car with the girl “was shot in the chest and grazed by a bullet in the neck” and is in critical condition. A 15-year-old who was standing nearby was “shot in the forehead” and is being hospitalized.

On Sunday night, a 14- and 15-year-old boy were shot around 8:15 pm while outside on the 4400 block of South Cottage Grove. The oldest of the two was already “unresponsive” when police arrived.


A 20-year-old was fatally shot “in the Humboldt Park neighborhood” around 4 pm. Before 5 pm, another man was shot and killed in East Garfield Park.

On Monday alone, fatal shootings occurred at 2:30 pm, 5:25 pm, and 7:50 pm. In the 5:25  shooting “a 19-year-old man was shot in the back in the 0-100 block of East 36th Place, less than two blocks south of Chicago Police headquarters in the Bronzeville neighborhood. The man was taken to Stroger Hospital, where he died.”

It should be noted that Chicago has some of the most stringent gun controls in the country. And during the last year alone, Mayor Rahm Emanuel (D) pushed to limit the number of places where law-abiding citizens can buy guns for self-defense, pushed for a limit on the number of guns they can buy for self-defense, and used Chicago as a springboard from which to argue for expansion of background checks on the national level.

On May 20 Breitbart News reported that the law blog Chicago Now argued that all Americans should have to pass a test and get a license before being allowed to own a gun–this is how it’s done in Chicago.

In both cases–Mayor Emanuel and Chicago Now–the goal is to export the successes of Chicago’s gun control experiment to the rest of the country.

Twelve killed and “at least” 43 wounded in Memorial Day Weekend shootings in Chicago.