Police object to being filmed, for obvious reasons. 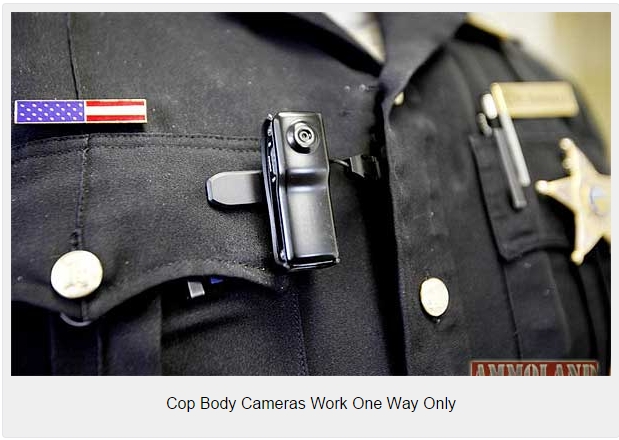 The lame-stream media told you:

Every state in the union is considering putting body cameras on police, following racially charged shootings of black criminals and other black people by police officers. Since the beginning of 2015, at least 15 states have introduced legislation to limit release of footage from the cameras through open-records laws. Everyone is clamoring for the devices, which seem to be a great idea. The White House is requesting free money from Congress to buy lots of test units for police.

The Uninvited Ombudsman notes however that:

While many members of the public are blindly welcoming the camera idea, few have considered that this really means, “Big Brother is watching you.”


Police and authorities have a very bad impression of the public wearing body cameras also, to film the police, since police cameras only take pictures in one direction — of you as suspects.The devices omit police actions, expressions and everything happening behind them. The cameras also come with on-off switches.

Police have been known to confiscate or forcibly destroy citizen cameras, or to falsely claim it is illegal to make recordings of them — which everyone knows might show them up to no good. The widespread presence of video recorders in cell phones has recorded numerous police actions recently, exposing wild acts of abuse that would otherwise go unnoticed.

It has perhaps paradoxically led to the outcry for police to start recording the public.

Few people doubt that police caught in acts of murder or other felonies would destroy video evidence immediately, given the opportunity.

Hey, Hillary destroyed thirty thousand pieces of evidence and no one was even killed… well, we don’t actually know that. And I digress.

The presence of police body cameras also have the potential for stopping good, friendly police from cutting you slack, letting you slide for minor infractions, and letting you off with warnings, or looking the other way. When a Mr. Nice Guy approach makes more sense than strict adherence to silly rules — if no one is watching — LEOs may be stuck in statist schtick.

Cost and storage space are unintended factors as well. Data-memory makers have to be lobbying hard for this financial windfall, if c. 900,000 sworn officers nationally will be recording life 24 hours a day. Remaining unresolved is whether police should notify you they are recording (Spokane plans to notify, Tempe only if asked, for example), whether the data should stream to central command or be dropped off at end of shift (raises many tech and legal questions), who gets to see what and when (the public, suspects, lawyers, researchers, media, cops before writing up reports, or not, new teams of police video reviewers, paid for how), and how to evaluate mysteriously missing sections or possible infractions — if any.

The person currently in the White House called it “21st century policing.”

About GunLaws.com:
Scottsdale, Ariz.-based Bloomfield Press, founded in 1988, is the largest publisher and distributor of gun-law books in the country. Our website, gunlaws.com, features a free national directory to gun laws and relevant contacts in all states and federally, along with our unique line of related books and DVDs. “After Your Shoot” for media review is available on request, call 800-707-4020. Our authors are available for interview, call to schedule. Call for cogent positions on gun issues, informed analysis on proposed laws, talk radio that lights up the switchboard, fact sheets and position papers. As we always say, “It doesn’t make sense to own a gun and not know the rules.” Visit: www.gunlaws.com