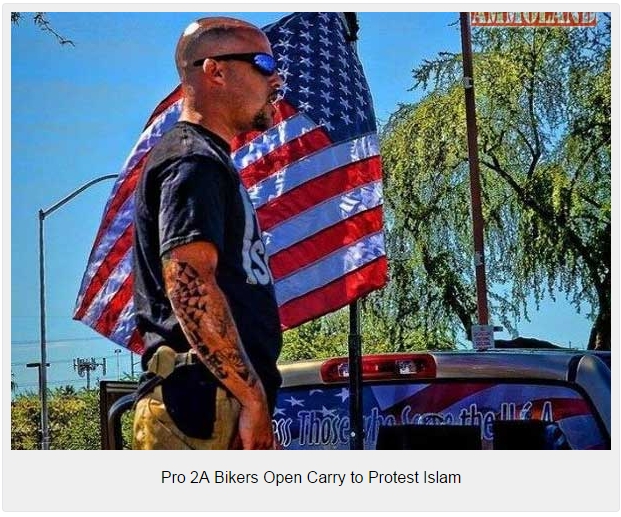 On May 29 2015, bikers in Pheonix, Arizona, are holding a “Draw Muhammad” contest outside the mosque at the Islamic Community Center of Phoenix, which is where the two gunmen who opened fire in Garland, Texas, allegedly attended.

Nadir Soofi and Elton Simpson drove from Phoenix to Garland and opened fire outside of the Curtis Culwell Center on May 3 2015, while a Muhammad cartoon contest was being held. The two men were quickly killed by police working security at the event.

In the weeks since that event, numerous media pundits have criticized Pamela Geller for organizing the Muhammad cartoon contest to begin with. At what she described as her freedom of speech and expression, pundits recoiled and said she was asking for it by allegedly antagonizing Muslims.

For example, following the attack, The New York Times said Geller’s contest “was not really about free speech. It was an exercise in bigotry and hatred posing as a blow for freedom.” The paper tried to explain that those who see it otherwise are confusing “hate speech” with free speech.

According to Vocativ, Ritzheimer says his contest is an exercise in free speech and is being held, in part, to respond to the “liberals” who criticized those gathered in Texas with Geller instead of criticizing the two Islamic men who walked up to a cartoon contest and opened fire.

He put it this way:

“This is not about race or any other side agenda that the Liberals are making it out to be. This is purely 100% a Freedom of Speech Rally. Stand Tall and show that we can PEACEFULLY protest our rights that are under attack. That is the sole cause for this Rally and Islam wants to silence us.”

Ritzheimer is also asking all attendees to exercise their Second Amendment rights and bring firearms in case the expression of a First Amendment right “comes under the much anticipated attack.”

Next What If There Were No NRA?