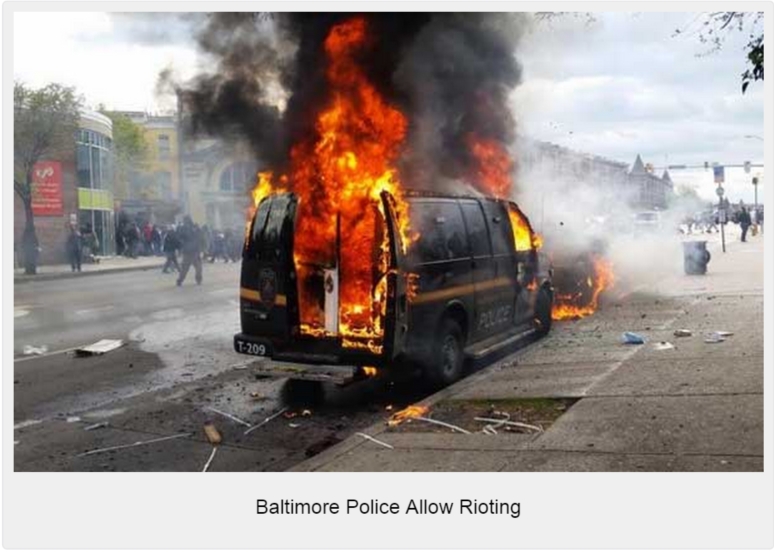 The lame-stream media told you:

“We are deploying every resource possible to gain control of the situation and ensure peace moving forward,” Baltimore mayor Stephanie Rawlings-Blake said, on page one of USA Today. Two images in the Arizona edition showed heavily uniformed riot police tussling with a few individuals in the street. The national edition had a different calm image.

The Uninvited Ombudsman notes however that:

While USA Today would, if asked, insist that they accurately quoted the mayor (I asked, they did), the mayor’s statement is false, an outright lie, which anyone watching witnessed on live TV, as hundreds of heavily uniformed riot-equipped police officers stood in lines. They calmly watched rioters and looters setting fires, driving stolen cars into fires and creating general mayhem easily within reach, while they had obvious orders to stand around and do absolutely nothing.

No reporters from USA Today asked the mayor about her obviously false statement, or if they did, editors at the paper refused to use her response. The image in the national edition of USA Today on the same day shows a single evidence-quality photo of a black male suspect carrying what appears to be stolen contraband past a background of fire, smoke and police vehicles. No images of hundreds of police standing around doing nothing were run, for reasons that were unclear at press time.


Despite the mayor’s inaccurate statement of doing everything possible, she decided to enact a curfew the day after the riots, which allowed the riots to take place, 200 businesses to be destroyed, and her black brethren to load up on stolen goods, an unpopular commentary to make. Mr. Obama blamed the media, the police, hopelessness and said we need to do “soul searching.” Searching some of the “soul brothers” might turn up some of the stolen loot. No searches are planned.

Despite wall-to-wall coverage of the one black man who died, igniting the black riots, black mea culpas, white guilt and conservative and liberal talk shows, more than 70 blacks have been murdered in Baltimore this year alone, with no news coverage, no mea culpas and no talk shows, causing cynical observers to suggest black lives don’t matter. Who are these people? No one is saying publicly. The cause of death for the one black whose death ignited the riots is not known, though six people are being charged with his murder.

About GunLaws.com:
Scottsdale, Ariz.-based Bloomfield Press, founded in 1988, is the largest publisher and distributor of gun-law books in the country. Our website, gunlaws.com, features a free national directory to gun laws and relevant contacts in all states and federally, along with our unique line of related books and DVDs. “After Your Shoot” for media review is available on request, call 800-707-4020. Our authors are available for interview, call to schedule. Call for cogent positions on gun issues, informed analysis on proposed laws, talk radio that lights up the switchboard, fact sheets and position papers. As we always say, “It doesn’t make sense to own a gun and not know the rules.” Visit: www.gunlaws.com

Next The Decline of Christian America