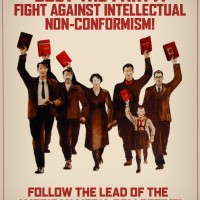 I would like to shed light on a media trick commonly used to initiate misinformation and rancor toward Republicans. But it no longer stops there. The media now uses it as a form of social behavioral modification.

I do not watch and I very seldom read the agitprop Fox News shovels. It is my considered opinion they are no more trustworthy than CNN or MSNBC. With that as a backdrop, permit me to point out how the various media entities are intentionally misleading you pursuant to Obamacare.

An Associated Press (AP) article posted on Fox News was titled “ObamaCare Fallout? Supreme Court Ruling Sets Up Potential Obama, GOP Battle.” (5/25/15) The first bit of misleading information is the inferred idea that Republicans will in someway take up the fight to end obamacare once and for all. Anyone believing that might as well admit to believing in the tooth fairy.

This AP piece is pure agitprop. From the very first paragraph it spins and insinuates information designed to set up a straw man for low-information voters to blame whichever party they typically do not vote for. The information it claims to provide is not information at all.

When a person actually reads this “Gar-Bage,” they see it is nothing more than veiled justifications for Republicans not doing the right thing by the people.

The AP doesn’t come right out and say that but it cozies up to the line of “strong inference” of same when it repeatedly points to the states with Republican governors and lawmakers who are up for reelection.

Doing what is right for We The People should not be and must not be predicated upon a politician’s reign in office. Politicians are not elected to save their own behinds, they are elected and adjure to uphold and act in our best interest.

The article is filled with the obligatory scare stories of people not being able to get coverage because of pre-existing conditions and the lies of massive premium increases along with companies no longer offering coverage.

I owned an insurance agency for many years and I can point to the number of people that I was unable to get coverage for on one hand. That is not hyperbole; it is fact. I specialized in impaired risk health and life policies. I can also say that the premiums for same were not exorbitant in any sense of the word. They were quite affordable.

The truth is that I’ve been told by insureds that under Obamacare their premiums have increased 400 percent. There are many other personal accounts that people have shared pursuant to their forced involvement with Obamacare. (FOR SOME SEE: http://mychal-massie.com/premium/speak-out-your-obamacare/)

This article weaves in everything but the truth. Obamacare was not a landmark legislation but an overstepping of Constitutional authority on every quantifiable level. It was passed using the most villainous Executive Branch tactics used in modern history – if not in the history of our government. The draconian exercises Obama employed to force Congressional members to submit to the bill far exceeded those President Bush used to force through No Child Left Behind and the Medicaid Prescription Bill.

Obama personally and knowingly lied to the American people. He used the federal government to bully and threaten private corporations who tried to prepare their employees against Obamacare. Congress lied about the bill with Nancy Pelosi arrogantly boasting the bill would have to be read after it was passed to find out what it actually said.

Which brings me to another point. Obama and congress literally, not virtually, LITERALLY, knowingly broke the law to pass Obamacare. With that said, how can We The People be forced to comply with that which by its existence is not supported Constitutionally and which carries punitive penalties if we do not comply? How can We the People be forced into supporting that which is illegal?

Obamacare was always a Ponzi scheme designed to usurp one-sixth of the national economy and to use the forced extortion of monies from the young to pay for the Medicare of the seniors because government has used said monies for their leisure instead of keeping it in the “lockbox.”

There is one more thing I want to point out, (of many more things I could point out) and that is the article speaks ad nauseum about what the government will pay out for those who cannot afford healthcare. That is a damnable lie. The government doesn’t have its own money. It has our tax dollars. Which means that you and I will have to cough up more and more of our hard earned monies to provide for those who the free market should provide for.

I could write a small novella pursuant to the agitprop contained in this article. Below you will find a video to my interview with Neil Cavuto on Fox Business News Channel in which he and I discussed this very thing. You can also find the AP article here: Fox News

Next She's Down In The Polls, But Throws Stingers Like No One Else